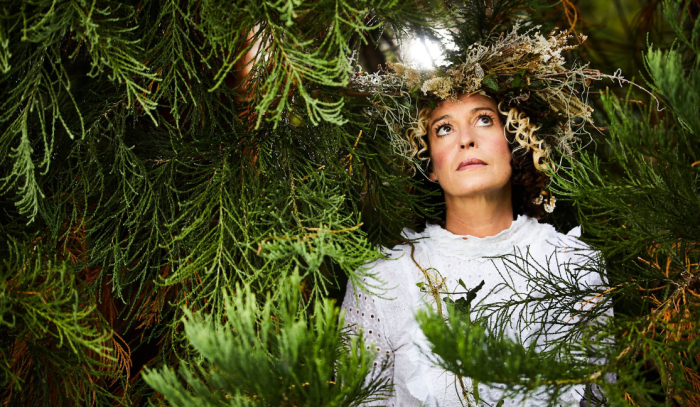 Kate Rusby is a Holly Head. If you hadn’t already spotted from her other Christmas albums, Sweet Bells, While Mortals Sleep, The Frost Is All Over and Angels and Men, she is not only Santa’s biggest musical helper, but she is also an incurable Christmas nerd.Obsession can lead an individual down many different paths, but in 2019, it drew Kate to her fifth festive long-playing offering. It’s one of the warmest Christmas albums you’ll ever encounter and that’s nowt to do with climate change!

This year, Kate is determined to bring the joy of the usual Christmas tour to the comfort of everyone’s homes with a special delivery of a full-length concert streamed worldwide. This year, on the 12th December, everyone will get a front row seat for Kate Rusby’s Happy Holly Day!

Winter is supposed to be the season of barrenness, of Jack Frost nipping at your nose and of needing your big coat. It may get dark at four o’clock and you may become cynically sick of Slade, John Rutter albums and Merry, Merry Christmas by New Kids on The Block by the second week in December, but Holly Head will illuminate and kindle hearts and hearths. It’s the Christmas album you’ll still be compelled to play, guilt-free, at significant volume, in mid-May.

A Kate Rusby Christmas Concert perpetuates the tradition of Yorkshire carols, specific carols sung in the crowded pubs of South Yorkshire. Kate sat in the corner of those crowded pubs as a child, so the songs she brings to these shows are in her bones. For over two hundred years, from late-November to New Year’s Day, North Derbyshire and South Yorkshire communities would congregate on Sunday lunchtimes, in their local public house, to belt out their own versions of familiar carols, carols that were often frowned upon by the church in Victorian times as ‘too happy’.

Her happiness, humour and storytelling are a feature of Kate’s live shows. Each auditorium becomes her local pub or front room and we are her welcomed and well cared-for guests.

Joining her on stage for this one-off worldwide stream of Christmas cheer will be a top-flight brass quintet affectionately known at The Brass Boys and, as ever, her hugely talented and intuitive band of musicians:

Josh Clark on drums and percussion

“Rusby has established a soft-focus amalgam of carols and traditional songs with the emphasis on her native Yorkshire.” – Sunday Times

Making me dream of a White Christmas ….. here’s something to get you in the festive spirit …