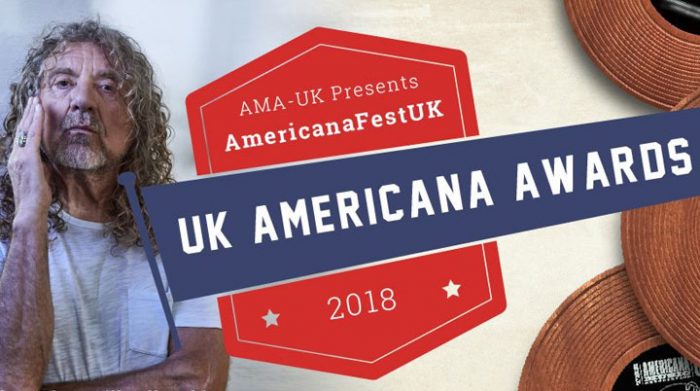 The third annual UK Americana Awards took place at London’s Hackney Empire last night, rounding off two days of activities at this year’s AmericanaFest UK, including an evening of artist showcases in venues around Hackney on Wednesday 31st January and daytime conferences.

In a glorious night celebrating the thriving UK and international Americana music scene, an audience of guests, AMA-UK delegates, members of the music industry and the public were treated to performances from Lifetime Achievement Award recipient Robert Plant and the Sensational Space Shifters, a stripped-down, unamplified performance from the front of the stage by Mumford & Sons, winners of The Trailblazer Award, plus a unique, surprise collaboration between Robert Plant and the Sensational Space Shifters and Mumford & Sons.

Also taking to the stage were International Artist of the Year 2018 Courtney Marie-Andrews and fellow nominees Imelda May and Angaleena Presley and UK Artist of the Year 2018 Emily Barker as well as UK Album of the Year winner Robert Vincent, Bob Harris Emerging Artist Award recipients The Wandering Hearts and Award nominees Aaron Lee Tasjan and Worry Dolls. The evening was capped by an all artist finale of “Wild Flowers” in tribute to Tom Petty.

To mark the second anniversary of the launch of the Official Americana Albums Chart, Martin Talbot, CEO of the Official Charts Company was joined by Wolverhampton Wanderers and England footballing legend Steve Bull to present Robert Plant with the award for Best Selling UK Americana Album of 2017 for his album Carry Fire.

Winners of the seven membership-voted Awards were as follows:

Recipients of Awards from the AMA-UK Board:

Lifetime Achievement Award presented by Bob Harris
Selected by the board members, their highest honour is awarded to a UK artist, duo or group in recognition of their outstanding contribution to the Americana genre over the span of their career and life in music.

The Trailblazer Award presented by Billy Bragg & Jed Hilly
Selected by the AMA-UK board and celebrating a UK artist, duo or group that has taken an exceptional path, inspiring others to follow in their footsteps in developing the Americana genre.

The Grassroots Award presented by Danny George Wilson & Ralph McLean
A newly-established award selected by the board members, this special award celebrates the sometimes un-sung heroes of the UK Americana scene. It is presented to people working in the industry (in a capacity other than as artists) who have made outstanding efforts to support Americana music from the grassroots up.

The AMA-UK is a professional trade association representing and advocating for the voice of American Roots music in the UK. Its membership comprises musicians, both from the UK and overseas, plus professionals from all sectors of the music industry.