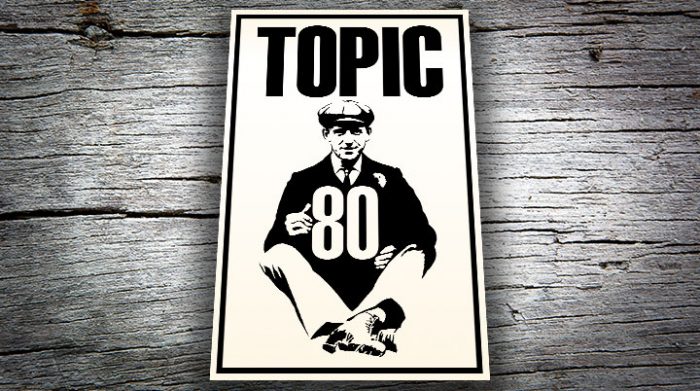 “I’ve been buying and scrounging Topic Records since 1954. It feels like Topic has always been there, quietly doing good work. Like a backbone.” – John Peel, 1999.

With its origins in the Workers’ Music Association, through the mid-20th century folk revival to the present day, Topic Records has established itself as not only the pre-eminent British folk music label but one widely respected throughout the world.

During the past 80 years, Topic Records has built a deserved reputation for not compromising the nature of its work or that of the independent spirit of the artists it represents. Irrespective of fads or fashions, Topic has not simply survived, but it has grown and flourished too – proof, if any were needed, that “grass roots” interest in traditional music, the artists and the label itself, has remained constant and strong. Topic has released some of the most influential folk recordings of modern times by a host of revered artists, from Anne Briggs to Peggy Seeger to June Tabor to Ewan MacColl and many, many more.

Not content to merely rely on the undeniable splendours of the past, Topic Records continues to look forward to the future with considerable optimism for both itself and the genre to which it has long been central. 2019 sees a flurry of new releases, further special events, live performances, exhibitions, documentaries and podcasts.

Also forthcoming in 2019, will be Topic Records Presents, a series of concerts and events at Cecil Sharp House, England’s award-winning folk arts centre that is home to the English Folk Dance & Song Society. From June 5th 2019 – January 5th 2020, CSH will host ‘Topic Records: Folk In Focus’- an absorbing exhibition of iconic photographs from the label archive focusing on the seminal artists who’ve helped shape contemporary folk music as we know it. The exhibition will include era-defining shots of Anne Briggs, Shirley & Dolly Collins, The Watersons, Nic Jones, June Tabor, Martin Simpson, Eliza and Martin Carthy, Peggy Seeger, Ewan MacColl and many more.

As well as all of this they will also be releasing these treasures:

May 10th: Eliza Carthy’s new album Restitute will be released on Topic Records – her first ‘solo’ album of traditional music in 14 years.