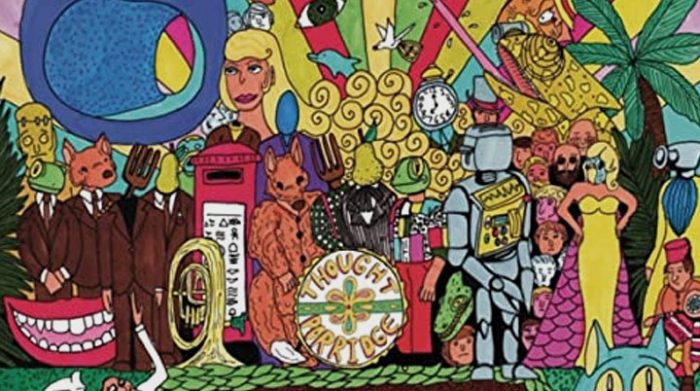 Musically reminding me of the Bonzo Dog Doo-Dah band and visually of Devo, this album their fourth and five years in the making is a sublime example of British sonic eccentricity.Hailing from Leeds Biscuithead & the Biscuit Badgers are known for their dynamically and outrageous live shows and exhibitionism. Filled with catchy and positive lyrics the lengthy gestation of this the latest album is due to the addition of string and brass players to the already established line-up of vocals, ukulele, piano, tuba and drums.

The song titles give a heavy hint of what to expect of each track, off the wall offerings such as ‘The British Cactus’ and ‘Succulent Society & British Hairpiece Champion’ vie with other even weirder offerings such as ‘When We Were Bakers’ and ‘Venus Flytrap’ for the daftest song of recent times. Drawing from and influenced by the music hall tradition, over all, the fun loses a little on listening to the record in isolation. The visual aspect of their performances are a key element missing from the recorded format. However they still do raise the spirits of the listener and we can be grateful for that.

Did you know a bison was more useful than a camel? No, then listen to track seven ‘Bison and Be Informed. Full of humour and eccentric references the album is not to be missed and for the price is steal. In need of a boost? – Then give this a go!