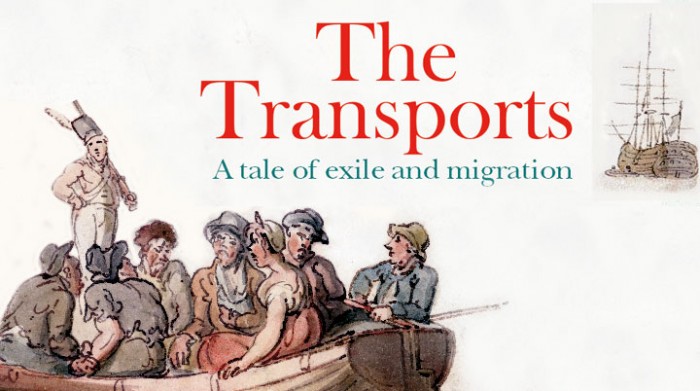 Some of the UK’s finest folk stars are to unite in a 40th anniversary revival of Peter Bellamy’s most revered work, The Transports. The Young’uns, will join forces with Nancy Kerr and Greg Russell, they will be joined by ex Bellowhead cellist Rachael McShane and celebrated trio Faustus (Paul Sartin, Benji Kirkpatrick and Saul Rose).

Sartin, another former member of Bellowhead, is also Musical Director of the project while author, storyteller and folk singer Matthew Crampton will be the narrator and Tim Dalling (The New Rope String Band) is Creative Director. The collective will take to the road in January/February 2017 in a 12-date tour of the groundbreaking ballad opera which includes a performance at  Glasgow’s Celtic Connections (Jan 25).

Supported by Arts Council England and Shrewsbury Folk Festival, the new show promises to be a highlight on the 2017 folk music calendar fusing together moving, inspirational music and spellbinding storytelling within a vital historical and contemporary tapestry.

The 40th anniversary show will also be seen next August in an exclusive festival performance at Shrewsbury Folk Festival. Rarely can Bellamy’s famed folk opera – a tale of 18th century exile and migration – have been more pertinent, set against the current tide of forced migration. Bellamy, a unique singer, musician and composer, tragically took his own life in 1991 at the age of just 47, but left a treasure trove of work of which The Transports is seen as his greatest triumph.

Complementing the tour will be the accompanying Parallel Lives project which aims to link the show to refugee support groups in the tour towns.

The Transports was written after Bellamy read a story in his local Norfolk newspaper about the first transport ship to Australia. It is based on the remarkable true tale of convicts Henry Cabell and Susannah Holmes. Imprisoned for theft prior to being transported the pair fall in love and have a son but are refused permission to marry. As Susannah awaits transportation to Australia at the quayside her son is refused passage but a guard, taking pity on her, travels with the infant to London to appeal to Lord Sydney, Home Secretary. Sydney orders that Cabell and Holmes be reunited, allowed to marry and transported together with their son as a family. The folk opera was released on Free Reed Records in 1977 featuring some of the biggest names from the Seventies folk revival – The Watersons, Martin Carthy, Nic Jones, A.L Lloyd, June Tabor, Cyril Tawney and Dave Swarbrick – and was named The Guardian’s Folk Album of the Year. It was first performed at Norwich Castle and has enjoyed several revivals since then including one marking its 25th anniversary.

While Paul Sartin will unveil new musical arrangements (as well as performing), storyteller Matthew Crampton will create fresh narrative elements to tell more fully the extraordinary story behind The Transports.
Says Paul: “This is perhaps Peter Bellamy’s greatest legacy – an immensely powerful, beautiful and haunting collection of songs and texts crafted in a traditional English idiom. Unique in its conception, it is unified by a narrative which speaks with immediacy and passion and demands both musical and human responses.” Matthew has recently toured a show based on his latest book Human Cargo: Stories and Songs of Emigration, Slavery and Transportation. He says: “Mass migration is a defining dilemma of today. There’s seldom been a more vital moment to revisit The Transports – it’s not just a great musical experience but a sharp reminder of folk music’s power in portraying the way the world works.”

“In our accompanying Parallel Lives project we will work with organisations supporting refugees in Britain, gathering stories of those trafficked or transported from Britain in the past alongside the stories of those arriving in the country and showing how the ebb and flow of migration has helped shape our country.”

The Transports tour will open at Cambridge Junction on January 24, with a finale in Sussex at the Ropetackle Arts Centre, Shoreham by Sea. In Derby there will be both a matinee and an evening performance.
Award-winning record producer Andy Bell will be the sound engineer for the production with Emma Thompson creating the lighting.