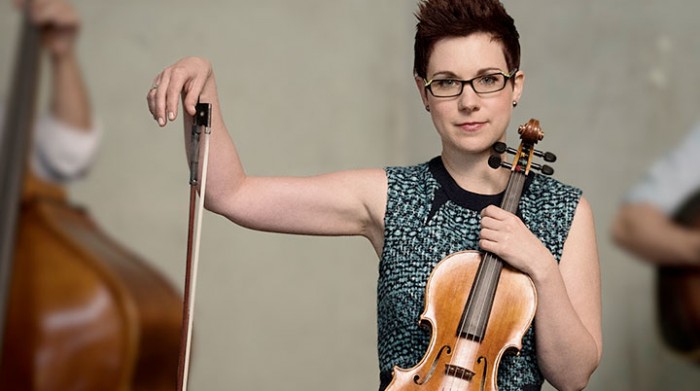 Touring here through both the Spring and Autumn, Canadian April was raised in a family shot through the with music and folkore, ending up a fiddling protégé at the time most of us were playing tick round the school yard.

Native to the Ottowa valley, besides fiddle, step dancing also flows through the blood in her veins, at times she’ll combine the two – not an easy thing chum – and on this her tenth album, the first laid down at the tender age of 13, she celebrates home specifically. The New Part is the extension which was added to her family’s domicile about the time she arrived in the world. It’s still the place she goes back to when she needs to touch base and clear her mind of the music business. As such the whole album has a very connected feel, Verch and her band mates, bassist Cody Walters and guitarist Hayes Griffin, playing is natural and fluid, they’ve a kind of internal telepathy for bluegrass, old time country upon which Verch can build.

So diverse are the tracks here that trad blends with original composition seamlessly and she’s even brave enough to strike a step dance as an individual track, which whilst it may not have worked in its purest form, once Miss Verch had altered it, then presented a new listenable entity, the rhythmic patterns display an intrigue and understanding previously hidden. The Belle Election has overtones given recent events on these shores but it’s a huge slice of exuberance and whilst she hasn’t the most compelling vocal what she achieves with her higher register is never out of place. Catch her on the road soon or later in 2015, in the meantime this is catchy and pleasing.