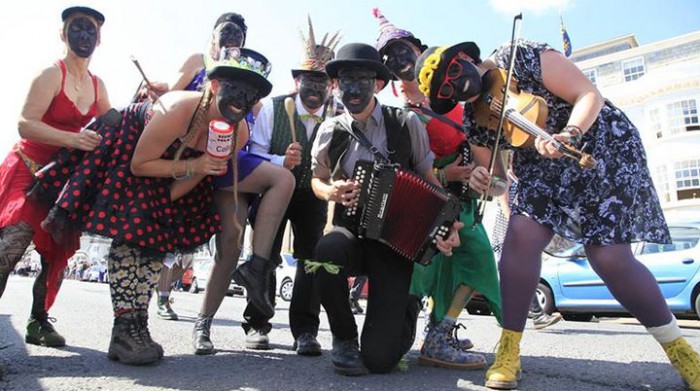 For everyone who knows even a little about the variety of Morris Dance sides dancers with blacked up faces are a relatively common sight. Explanations for its use vary from evoking the faces of miners covered in coal dust to chimney sweeps covered in soot, or, in the case of Foxs Morris as a disguise for 16th Century beggars. Whatever its origins the Morris sides certainly aren’t racists but they have been drawn into controversy after the ex prime minister David Cameron was photographed with the Foxs Morris side at Banbury Folk Festival. The picture appeared all over the press, not from the point of view of the ex PM enjoying some well earned rest after f****ing up the country, or even from a sudden explosion of interest from the national media in our heritage and folk traditions. No it went viral because he’s posing with a bunch of white people with blacked up faces.

Suggesting that Morris dancing is somehow racist is absurd, it is a vibrant folk dance tradition that is gaining in popularity amongst all ages, its practitioners are dedicated and talented folks – the only criticism I could ever level against any of them is that they can be slightly bonkers (must be down to accidental stick whacks on the head). Many sides feature a bloke in drag – is this an offence to women?

However, we are living in a very different cultural climate in 2016 than we were even a few decades ago. There is an uncomfortable similarity here between these Morris Dancers and the Black and White minstrel show, once the most watched light entertainment programme on the BBC, now a national embarrassment. ‘Whitewashing‘ in films is also a very hot potato at the moment; casting white actors in non-white roles. It is as old as the movies but continues to this day, the worst and most cringe inducing example is legendary Hollywood actor Mickey Rooney as Mr. Yunoshi in Breakfast at Tiffany’s. Rooney turned in a performance that was pure racist caricature in a movie that is still held in iconic regard by many of us. Marvel studios are currently experiencing it on their upcoming Doctor Strange movie that has Tilda Swinton cast as the ‘Ancient One’, a Tibetan in the original comics.

In this hyper sensitive climate it is easy to see how an image like this is seized upon by the media eager for controversial headlines. The next instalment in this drama sees Shrewsbury Folk Festival being drawn into the situation after being asked by community group Fairness, Respect, Equality Shropshire (FRESH) to ban the blacking up element of Morris. The festival organisers have found themselves caught between two opposing arguments and having to plot a course between them. They have decided not to book any more acts employing the full blacked up image after this year.

Tradition should be respected, however Morris sides have been happy to adopt modern colours, dress and themes whilst holding onto blacked up faces – can it still be justified? Does it matter if the (surely living) tradition adapts to modern sensibilities?