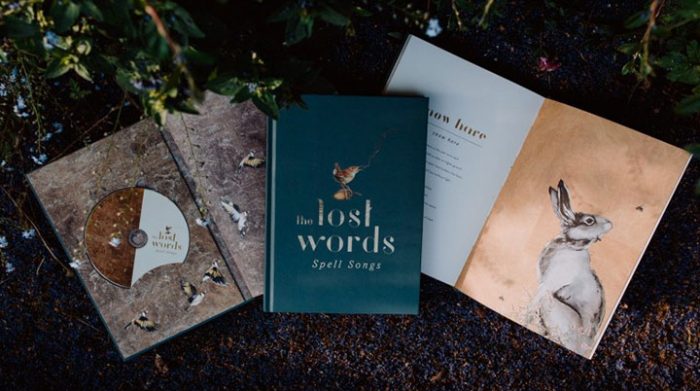 In 2017 Robert Macfarlane and artist Jackie Morris; wrote & illustrated a book of poems called ‘ The Lost Words’ aiming to reinstate words associated with nature such as acorn, conker and kingfisher that had been dropped and replaced by attachment, broadband and pixel in the Oxford Junior Dictionary. Now the album which brings together eight leading folk musicians Karine Polwart, Seckou Keita, Julie Fowlis, Kris Drever, Jim Molyneux, Kerry Andrew, Rachel Newton and Beth Porter.

Invitations to gather for a residency in the Herefordshire countryside resulted in this recording of 14 songs and accompanying 112-page book. Each of the songs sets lyrics around one of the missing words with a different musician taking the lead. Combining musical styles including folk, Senegal traditional and classical, wildlife audio recordings by Chris Watson are interweaved throughout.

‘Heartwood’ by Karine Polwart was written in response to the mass felling of trees across Sheffield. With piano playing by Jim Molyneux her intention is to stop the cutter’s axe. A fine opener this track immediately draws the listener to identify how in both urban and rural settings the natural world under threat. ‘Selkie-Boy’ interpreted by Julie Fowlis is based on the Hebridean folklore, of mythical beings, able to shed their skin and become human or seal, the cello with its voice like qualities captures the mystery of the supernatural. ‘Papa Kéba,’ Fowlis and Keita’s duet in Gaelic and Mandinka is a fruitful contest between the two singers contrasting styles. ‘The Lost Words Blessing,’ the album’s conclusion is catchy with strong female vocal harmonies summarizes and adds to the natural words concept and cry for common sense. A huge apology for the treatment meted out to our natural world companions never more bluntly than in ‘ Scatterseed:,’ Kris Drever’s ode to the dandelion he declares “ I never called you a weed/fallen star of the football field.”