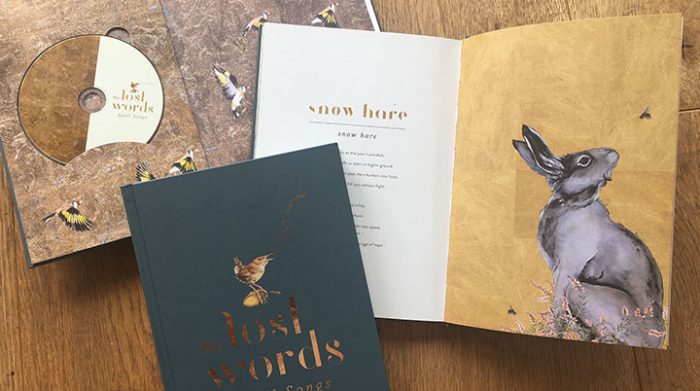 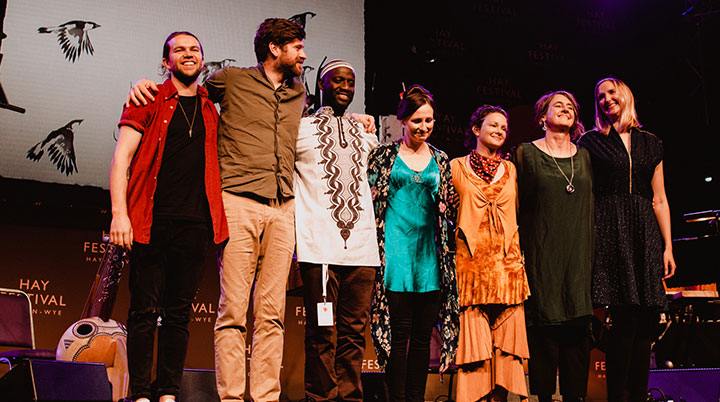 In 2018 Folk by the Oak Festival were overjoyed to commission Spell Songs, a musical companion piece to The Lost Words by author Robert Macfarlane and artist Jackie Morris; a celebrated ‘spell book’ rich with poetic rhythms and imagined birdsong that naturally invited a musical response. Spell Songs gathered together eight remarkable musicians whose music engages deeply with landscape and nature, to respond to the creatures, art and language of The Lost Words.

Spell Songs allowed these acclaimed and diverse musicians to weave together elements of British folk music, Senegalese folk traditions, and experimental and classical music to create an inspiring new body of work. In February 2019 Spell Songs enjoyed standing ovations at sell-out performances at major venues around the UK, including London’s Southbank Centre, and more recently on the main stage of Hay Literary Festival on 29 May:

“… one of the most sublime evenings you will ever enjoy. The magic of these superstars onstage – the art, the music, the sheer, ravishing beauty of the language… one of the greatest concerts we’ve ever had at Hay. Long, rapturous standing ovation. People weeping for joy”
Peter Florence, Festival Director, Hay International Literary Festival

Spell Songs has also been invited to participate in The Lost Words Prom at the Royal Albert Hall on 25 Aug, part of the BBC’s 2019 prom season. There will also be an appearance at Folk by Oak Festival, Hatfield House, Herts, 14 July 2019, coinciding with the general release of the Spell Songs album.

Here are 14 songs which capture the essence of The Lost Words. Spoken voice, whispers, accents, dialects, native languages, proverbs, sayings, birdsong, river chatter and insect hum all increase the intimacy of the musical world conjured by the songs. Inspired by the words and art of the original book, each musician brings new imaginings, embellishments and diversions which are rooted in personal experience, a deep respect for the natural world, protest at the loss of nature and language or appreciation for wildness and beauty.

The group seized on Beth Porter’s ideas for a song inspired by Robert’s new spell – Goldfinch. Golden light in dark times, the promise of hope, the potential for loss and regret are all woven through a multi–instrumental, multi-vocal piece which builds from a simple whistled tune accompanied by goldfinch song.

Karine Polwart spotted that Willow spell had captured both Seckou Keita’s and Rachel Newton’s imagination and she bought them together to work through the melodies. Soon a bright, rich and complex musical arrangement had been created. Seckou’s Mandinka vocals weave with a crescendo of backing vocals to produce an intricately balanced rhythmic delight of a song. The pairing of the lyrical and resonant voices of Julie Fowlis and Karine Polwart in The Snow Hare – music at its most pure, and the musical affinity between Kris Drever and Seckou Keita are among some of the wonderful discoveries of this collaboration.

Heartwood is taken from Robert’s ‘charm against harm’ written to support the Sheffield Trees Action Group. Karine Polwart brings her creative sensitivity to this protest poem by intermingling her own words and ecological concerns into rhythmic vocals and delicate melodies, overlaid with exquisitely subtle piano playing by Jim Molyneux.

Little Astronaut was initiated by multi-instrumentalist Jim Molyneux, who created the most exquisite and fragile of ballads where the lark soars over the whole group creating a choral work of great depth, yearning and beauty. Selkie-boy originated with Julie Fowlis and is a heart-stopper of a piece with its deep resonating cello and siren-like chorus. Kingfisher is a soundscape of delicate melodies, whispers and spoken voice which creates an overlapping, mesmeric effect for the listener. The album concludes with the most sublime ecological ‘call to action’ you will ever hear in The Lost Words Blessing. Prepare for it to stop you in your tracks.

Each song may have originated within the hearts of one or two of the musicians, but through communal creative respect and generous musicianship these acorns of ideas were soon turned into truly collaborative works resulting in unique, un-categorisable creations.
Just as The Lost Words took root and flourished, so Spell Songs has blossomed beyond everyone’s expectations. Inspired by their time with the musicians, Jackie Morris crafted new artwork while Robert Macfarlane conjured new spells, and so the CD grew into a book! The gold lettering and singing wren on the front cover give a hint of the artistic magic that lies within.

Art inspired music and music inspired art. Jackie Morris immersed herself in the musical residency where she generously created new iconesque artwork of each musician and their instruments portrayed in an unexpected and enchanting way. These new paintings, along with stunning photography by renowned photographer Elly Lucas, from the residential gathering, the recording of the album and the sell-out tour, fill this book with beauty. Writings by Robert, Jackie and Karine elaborate on the project itself and its eco-musicological message, further exploring the relationship between art and nature, music and conservation. 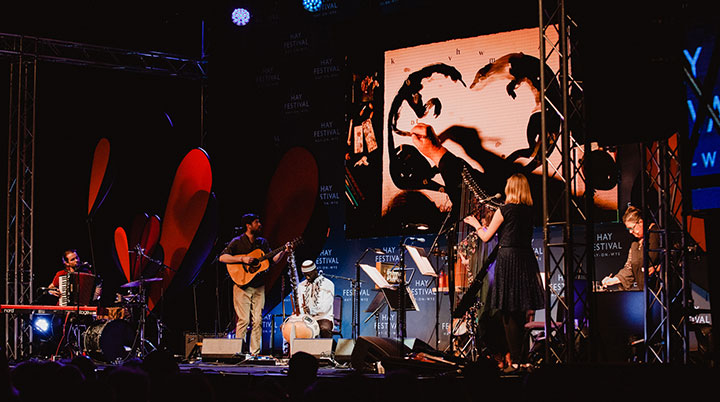 “I loved seeing the instruments come to life in their hands. Even sitting silent, waiting, you can almost hear the instruments hum. So, taking photos of each, guitar, cello, whistles, drum, kora, I began to sketch them with a bird, thinking not that the musicians should each have a ‘Spirit bird’ but rather the musicians would become the ‘spirit human’ for each bird”- Jackie Morris

Of equal excitement to those who were enchanted by The Lost Words will be the conjuring of 6 new beautifully composed and illustrated spells by Robert and Jackie. Egret and Peregrine shimmer with the same magic of the original book, while Snow Hare, Goldfinch, Grey Seal and Barn Owl also take flight with the music of Spell Songs into something even more extraordinary.

“Undoubtedly one of [The Lost Words] most thrilling transformations has been into the music [of Spell Songs] brought about by the vision and brilliance of eight musicians, who have together taken The Lost Words and turned it into something diverse, hopeful, moving and new” – Robert Macfarlane