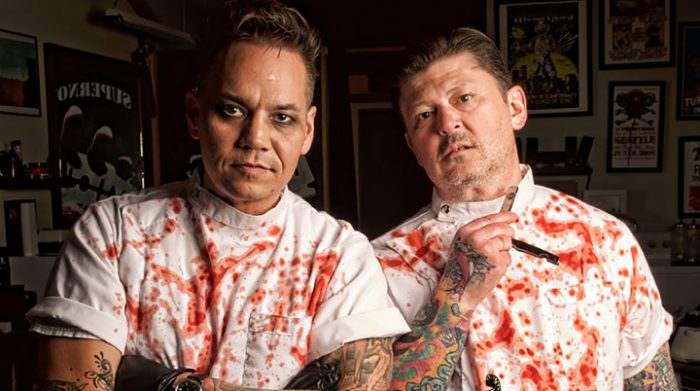 In the twilight world of the Brothers Cutthroat death, drugs and murder rule supreme. Taking their cue from the Seattle school of sleaze for this their second outing they’ve produced an incendiary mix of power and melody – a sort of grungified Ramones meets T.Rex if you will.

With legendary producer Jack Endino (Mudhoney, Nirvana et al) at the helm the duo of real-life barbers Jason Cutthroat (gtr/vox) and Donny Paycheck (drums) have by all accounts captured their electrifying live sound and what a snarling, growling beast they must be when they tread the boards with this repertoire.Clocking in at a brisk 25 minutes the band fairly rattle along through their lo-fi offering of blood and gore. The gut churning riff that kicks off ‘Taste For Evil’ sets the tone but the groove laden ‘Shake Move Howl Kill’ that follows is sure to be a live favourite – with a nastily delivered chorus that sticks in the brain like one of their straight razors.

Slowing the pace just a tad is the 60’s flavoured garage punk of ‘Out Of Control’, where Jason temporarily dons the mantle of Joey Ramone – albeit at 33 and a third – for a psychotic trip that sounds more alluring with every spin. The fun continues with the bone shaking ‘Black Candle’ – an everyday story of devil worship – that reverberates around the cranium thanks to some scorching slide guitar antics.The sense of the theatrical is palpable through this brutal romp, creating an incredibly effortless and dare I say razor sharp juxtaposition of creeped out hardcore and fun.

With the pair due to visit Europe later this year with their notorious live show – replete with blood splattered white coats – the band are well worth a look. Just don’t ask them to cut your hair!