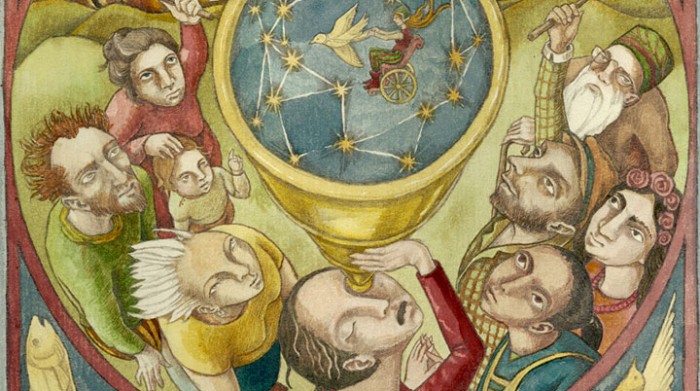 Steer By The Stars is Telling The Bees’ third album, following their ground-breaking debut Untie The Wind in 2008 and subsequent Spiral Earth Award-nominated An English Arcanum in 2009. So, it has been a while – and during that time the Bees have established their reputation as a fine live band across the scene with an ever-increasing crowd of devotees whilst retaining something of a cult status under the banner of ‘darkly crafted folk’. I am not sure exactly what that means but with Steer By The Stars, they are about to fly into the light because, quite simply, it is a seemingly effortless masterpiece.

Nothing is out of place. Every song and tune draws you into their diverse world which, although sometimes sombre, is full of celebratory wit, intelligent protestation, exuberant redemption and gentle valediction. The endlessly imaginative pen of Andy Letcher brings us songs of modern folk tales; some actual, some moral, some spiritual, others universal, all essential in their finely crafted narrative and matched by the infinitely creative accompaniments, with skilful variations and inventions that range from the rhythmic to the lyrical, the klezmeric to the pastoral.

It’s also beguilingly clever. The album opens with the marvellous tale of street theatre,  The Puppeteer Came Into Town,  full of carnivalesque threads and infectious refrains. The genius element is the addition of real-life master puppeteer Martin Bridle creating a show in the background. Down comes the fourth wall and you are not only in the crowd but also in the album.  Before you can catch your breath, it’s May Day and you are in Oxford, with Magdalene Bridge jumpers set amongst other town revellers. Andy was the driving force behind the new Oxford May Day Revels and the Oxford May Song encapsulates the spirit of this gathering. Jim Penny darts in and out with rhythmic Anglo concertina, Jane Griffiths’ fiddle alternates between riffs and soaring counter-melodies, underpinned with interwoven lines of cello and bass from Josie Webber and Colin Fletcher.

Windflower draws you further in with Andy’s plaintive vocals racing over punchy mandolin and concertina, alongside almost umbilical bass and cello lines. The instrumental interludes from Josie, Jim and Jane are so gorgeous that, as the song says, sometimes words are not enough. They ease back with Astrolabe, the complex filigree patterns of each player and singer beautifully aligned to the subject.

Sharply observed, witty lyrics and a tune imbued with a bittersweet flavour, One More Mazurka should come with an addiction warning.   With matchless dance band pedigrees, everyone plays their socks off and it sparkles with melodic variations and  pinpoint bass, squeezing out the last drops of delight as Andy’s vocals dip and dive in a heartfelt plea for one more dance, one more embrace. If it doesn’t make you want to dance till the end of time, check your pulse for signs of life.

The Bees do not miss a beat throughout the album. On the winterish Oxberg March, featuring the formidable piping of Mr Letcher, the cello adds re-assuring warmth amidst the drones and double-stopped fiddle. It’s a clever arrangement and it moves neatly onto a celebratory song of new life with St. Kevin & the Blackbird, full of swooping fiddle, syncopated mandolin and concertina. There is even the sound of young blackbirds. That type of trick can be a hard thing to pull off but they manage it with natural aplomb.   This is a savvy band, unafraid to confront  issues and Babylon hits hard, straight on after the celebration of birth, asking questions of the decision-makers. Urgent, challenging music and lyrics, a maelstrom of riffing and strumming from all concerned  and Colin Fletcher’s bass moving nicely to the fore as Letcher’s lyric fires the question “Who wrote the history anyhow?”  They follow this with a powerful setting of John Clare’s poem I Fear These Tory Radicals. No light touches here.  Darkly magnificent.

In the flick of a bow the mood is transformed with The Scholar Gypsy, a fantastic, life-enhancing romp with the band rocking out klezmer style.  Reeds, brass, strings soar in all directions. Particularly joyous is Colin Fletcher’s euphonium playing. Above it all, that slightly husky, come-listen voice of Mr. Letcher, is alive with jubilant flourishes that tell you he is probably enjoying himself as much as we are.

Then just as we are ready to dance on, they bid us farewell with Steer By The Stars, a song of great beauty both in its conception and its delivery.  Dreamy electric piano from Josie sets the backwash for melodic mandolin and pizzicato violin from Andy and Jane, some deftly placed guitar harmonics from Colin while Jim conjures up more concertina magic. Intense, gentle and knowing, it distils the very essence of this band. The plans and maps have all been torn up. All we can do is steer by the stars. You get the feeling the band knows the way.

Telling The Bees has a way with words and music that will leave you speechless at times. It is the habit of beekeepers when a significant event occurs to tell their bees. Steer By The Stars is a significant event. If you have bees, tell them. Then tell everyone else.