The award-winning podcast Folk on Foot has announced the line-up for a second Front Room Festival to take place on Spring Bank Holiday Monday May 25th.

It follows the success of the first festival on Easter Monday which raised nearly £110,000 through a crowdfunding appeal to support musicians who can’t play gigs during the lockdown. 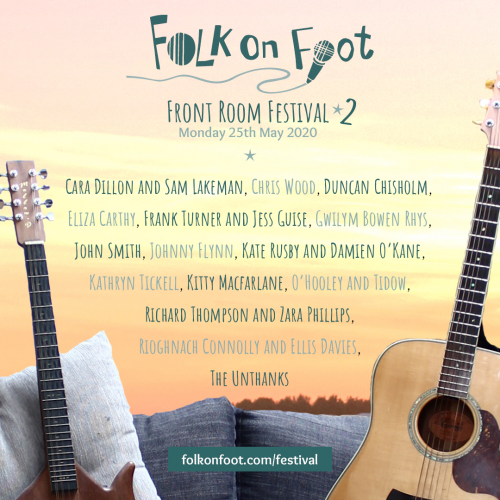 Like the first festival, a crowdfunding appeal will be launched with 50% of the money raised going to the charity Help Musicians and 50% being divided equally between the participating artists.Folk on Foot host Matthew Bannister said: “We were completely blown away by the reaction to our first Front Room Festival, but the hardship faced by musicians who can’t play gigs during the lockdown is just as acute as ever. So, we’ve put together another amazing line up to offer great bank holiday entertainment and raise money for a really important cause. “

Help Musicians Chief Executive James Ainscough said: “We have made payments of £500 to nearly 16,700 musicians experiencing financial hardship – that’s £8.35 million across just four weeks. Next we’re focussing particularly on those who will not be protected by the government safety nets – they will need support for many months.  This will require many millions more which is why I am so grateful for the fundraising of Folk on Foot and these brilliant artists.”

Donations can be made at www.folkonfoot.com/festival where there is more information.