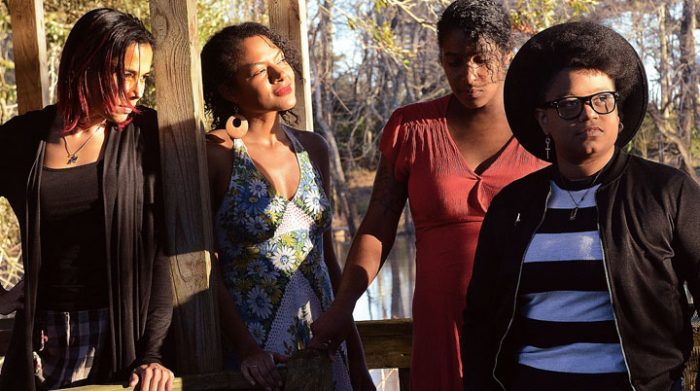 Collaborations, projects, accidental meetings. They’re all sources of inspiration for the more inventive musician but, in truth, the results of such musical experimentation vary enormously in terms of their relative success. Then, with that in mind, there are no apologies for the fact that this review looks at a magnificent record that came out earlier this year.

Our Native Daughters are Rhiannon Giddens, Leyla McCalla, Allison Russell, and Amythyst Kiah. Giddens and McCalla having already joined forces in the Carolina Chocolate Drops. Russell came to the fore with Po Girl but now is part of the duo, Birds of Chicago, whilst Kiah has a solo career going from strength to strength. With Giddens and Dirk Powell in control of production, you can see that there is some strong talent in this ensemble.

Tasked by Rhiannon Giddens with putting across a better understanding of the pain and suffering of women in a time of slavery, the result is powerful and varied in its approach. Opening with Amythyst Kiah’s bluesy ‘Black Myself’, the song puts a marker down for black identity with all her collaborators adding the required vocal punch on the chorus.

The underlying aim of the album is, often, very personal to those involved and clearly heard in their inputs to the project. None more obvious than when Allison Russell comes up with a song about the suffering of one of her own paternal ancestors, ‘Quasheba, Quasheba’. Its tone of defiance and resilience is one that pervades many of the songs on this record.

However, the centrepiece of the record, ‘Mama’s Cryin’ Long’, tells a tale of when a woman snaps under the relentless pressure of slavery. Sung from her child’s perspective, the sparse instrumentation with dramatic a cappella singing and handclaps puts across the terror felt by the child as her mother kills her brutal overseer and is lynched as a result.

While most the songs are written by the project members, there are some notable exceptions. Drawing from the writing of Bob Marley, Our Native Daughters take one of his finest political statements, ‘Slave Driver’, and apply banjo from Giddens to the song. It’s theme of the need for education mirrored in a traditional tune also covered here but with lyrics added by Giddens, ‘Better Git Yer Learnin”

‘Blood and Bones’, written by Amythyst Kiah and Allison Russell, focusses on the consequences of black women being raped by their white overseers. It’s a difficult listen in terms of its lyrical content though the ‘Music and Joy’ track reminds us what is also at the heart of this record. There are strong messages in their music that encourage us to look more closely at the perspective of women in slavery. This is a record that deserves your attention.