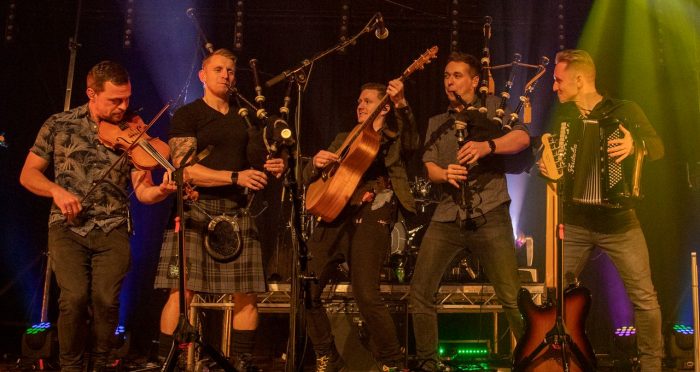 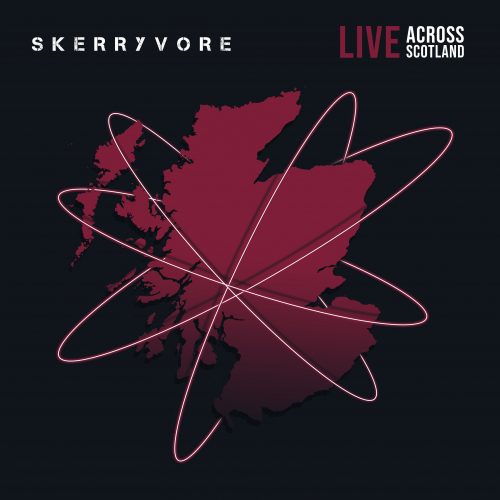 Skerryvore’s signature trad-rock fusion is captured in full swing at towns the length and breadth of Scotland, all the way from Aberdeen’s Tivoli Theatre and The Ironworks, Inverness to Glasgow’s Royal Concert Hall, Stramash in Edinburgh and The Albert Halls, Stirling. The album also features tracks recorded at unforgettable shows in a host of smaller locations including Portree, Fort William, Forfar, Darvel, Selkirk, Dunoon and Killin.

Live Across Scotland captures the electricity and undiluted joy of a Skerryvore gig. Their powerful sound makes it easy to see why they have a loyal fan base worldwide and have been twice awarded ‘Live Act of the Year’ at the Scots Trad Music Awards.

Formed by brothers Daniel Gillespie (accordion) and Martin Gillespie (pipes, whistles and accordion) along with Fraser West (drums) and Alec Dalglish (guitar and vocals) on the Isle of Tiree in 2005, Skerryvore’s line-up includes Craig Espie (fiddle) and Jodie Bremaneson (bass), Scott Wood (pipes and whistles) and Alan Scobie (keyboards).Together they fuse their traditional west coast roots with pop, folk and country influences to create their own high-energy brand of contemporary Scottish music.

Over the last 15 years the band has performed in more than 25 countries worldwide including across the UK, Europe, USA, Canada and Australia – but they chose their most recent Scottish tour to record tracks dating back to 2007 for this live album.

Before lockdown, the eight-piece band had been due to host their very own one-day festival branded ‘XV’ against the iconic backdrop of Inveraray Castle, Argyll, to mark the milestone year.

Martin Gillespie of Skerryvore said: “We’ve been planning to record a live album for years so our recent winter tour that took in venues across Scotland that we love playing in just felt like the perfect opportunity.  This album is our first fully live album recording and we wanted it to really capture the sound and atmosphere of our live shows. The album feels like a fitting way to mark our 15th anniversary and is all the more special now as we find ourselves, like so many others, missing live gigs and festivals. Live Across Scotland hopefully gives fans a taste of the live show atmosphere in the meantime.”

The album was mixed by Ron Cook from Split The Difference Audio in Illinois USA, who has provided a broadcast mix for the Yamaha Grand Plaza Stage and mixed front of house for the Chicago Cubs World Series Rally.

Live Across Scotland is out on 10 July 2020 and will be available on CD and to download and stream. CD is available to pre-order now at www.skerryvore.com