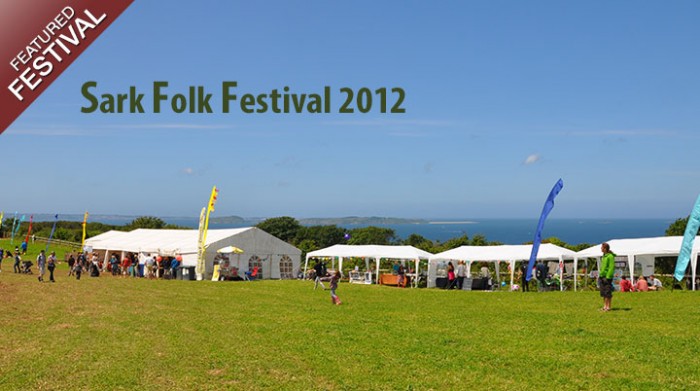 The third year for the Sark Folk Festival and the organisers have kept its winning formula. It’s small, just 1000 tickets go on sale, yet the calibre of music they attract to the island is way above what you would expect of a festival this size.

Pilgrimage to an island paradise

This being our second visit to the Sark Folk Festival made us realise what a unique event it is. Simply put it is a bijou little festival that punches way above its weight with a fantatstic line up, all set on a truly unique island.

The journey does become a kind of pilgrimage, last year’s event left such an indelible mark in our minds that retracing our steps was far more significant than just a race to get there as quickly as possible.

The transition from rush hour traffic on the M25, passage through Gatwick airport and then to landing on Guernsey calms the mind. A good festival involves some level of suspension of reality, a feeling of stepping outside the normal day to day routine and boundaries. The Sark Festival is surely the ultimate expression of this.

So, forgive me if I talk first about the journey, but it is an important part of the experience.

Flying at 12,000 feet over the Isle of Wight in the small Aurigny Airlines turboprop plane feels like an adventure beginning. It is more visceral than the normal plane you go on holiday in, its got propellers for God’s sake, it’s loud and vibrates. Flying today has been reduced to the greyest average, passengers are just cargo to be shipped and make a profit from. This feels different.

The Channel Islands appear looking like the kind of thing that a child would draw floating in a jade sea. Patchwork fields resolve themselves into less familiar, smaller fields that are more reminiscent of England of the 1940’s. The airport is small and easy to transit through and the air smells different. The sea, wild flowers, grass and trees are all in there, but also something else that you can’t put your finger on – it smells like being on holiday.

Airport to harbour for the ferry necessitates a taxi across the island. Surprisingly busy narrow lanes lead into bustling St Peter Port, where we have a couple of hours before the ferry departs to grab some lunch – a crab salad and scallops that melt in the mouth washed down with a Guinness hit the spot nicely.

You could, and probably should, spend a day here to explore the lanes and beautiful harbour marina, but our time is up as the ferry awaits. As the passengers file on familiar faces appear, Phil Beer and The Shee amongst them. Sark lies a little to the east of Guernsey and the boat plies a course through rocky outcrops and larger islands dotted with gulls and cormorants. The sea sparkles as it is whipped into peaks by the boat, wind and the powerful currents ripping between the rocks. Is it jade, azure or emerald? All of them and more as Sark looms into view. Imagine a picturesque chunk of Cornwall snipped off and set between sea and blue sky, the first part that we get close to is the smaller island of Brecqhou, home to the Barclay brothers – business men who have invested heavily (and sometimes controversially) in the island. The festival site can also be glimpsed at the top of the cliffs, it’s white marquee tops just standing out…

The music from the festival can be heard as you travel the narrow tree fringed lanes close to the fest, in some they have joined overhead to make a tunnel . Be vigilant however, there may not be any cars or motorbikes here, but neither are there any pavements so pedestrians, cyclists, tractors, small children and horses share the lanes. We got bikes this year and I proved the point when I nearly crashed into Steve Knightley on one coming the other way, his hair streaming majestically behind him. Luckily he didn’t twig it was me. I wouldn’t want to have been responsible for him missing his Show of Hands gig whilst he had my camera tripod removed from his sternum.

Just a little rise and then it is all down hill to the site through a vineyard, getting there is one of those ‘wow’ moments. The site is at the top of the cliffs so your eyes are drawn to the ocean with Guernsey and Herm Island on the horizon.

Whilst the main acts perfom at the festival site there is a whole lot of sessions, dances and performances at many places around the island. Unfortunately this year the area where they had one small stage, through a hedge and perched right on the top of the cliffs, is out of bounds as it has been turned into a helipad. Didn’t see any helicopters though.

Luckily the main field the festival is in is plenty large enough, you don’t feel crammed in at any point. They have two main stages that are in an ‘L’ shaped arrangement with the bar in the middle, this and tables and chairs outside are the main focus for chilling out over the weekend. The excellent range of local, fresh food is here once again, everything from fresh lobster to home made vegetarian quiche, all at good prices and very tasty.

Then up to the festival site for the main day of entertainment. It was to be a mix of styles, genres and traditions that make this such an inclusive festival.

What a contrast their big chested salty songs were with Ewan McLennan, himself a study in intensity and power but from a completely different angle.

Bruise were another revelation, coming across brilliant artists is what makes festivals good.

Someone that we had been keenly anticipating was Emily Barker and the Red Clay Halo, one of our favourite albums of last year – and they didn’t disappoint with a sound that was truly more than the sum of its parts. Just the day before they had played at Maverick Festival up in Suffolk and they were one of the highlights for Dave Kushar covering that fest for Spiral.

It is always a pleasure to watch Martin Simpson and Andy Cutting, Martin has such a great repertoire and Andy is just amazing in the rapport he seems to have with everyone he plays with.

Show of Hands pulled a very big crowd, unsurprising really as they were pitch perfect for this festival. Being so used to seeing them with Miranda Sykes on double bass it was refreshing to be reminded just how good they are as a duo. The following day Martin and Andy would be recording some parts for the new SOH album on the island.

Les Dieses were another great find, not sure how you would describe them, high energy world/folk I guess, 3 Daft Monkeys certainly liked them and were talking collaboration – now that would be good.

3 Daft Monkeys finished the day up in grand monkey style – Around about this time we realised that we had been completely seduced by the festival (or maybe the cider and lager had some additional effect), we leapt about with Emily Barker and band down the front – hence I only seem to have very blurred pictures of 3DM actually performing. Needless to say they were the absolute perfect band for this festival, my lasting memory will be of all the shiny happy faces watching them.

Then it was off into the dark dark night, drunk on a bike with just a head torch to light our way home across the island. That’s when the adventure really started….

We arrived in time to witness James Findlay’s impressive vocal ability drawing a large crowd on the Vermerette stage. Winner of BBC Young Folk Award 2010, it’s no surprise to learn that the Dorset born singer comes from a family background of traditional singers, and wows festival goers with his distinctive guitar style and rich tones.

Just time for some freshly cooked fish and chips, then over to the Alligande stage where duo Sean Lakeman and Kathryn Roberts deliver a stunning set, Kathryn’s earthy vocals merging with Sean’s rousing guitar to provide the regretful yet perfect end to another sublime Sark Folk Festival.

Massive respect must be paid to the festival committee, who, spurred on by Simon Harvey’s idea to create an island festival on par with one of the scottish island events, have managed to greatly exceed everyone’s expectations, delivering a festival that in only its third year boasts a line up, audience and atmosphere more wide-ranging, unique and truly special than many of its more established competitors….