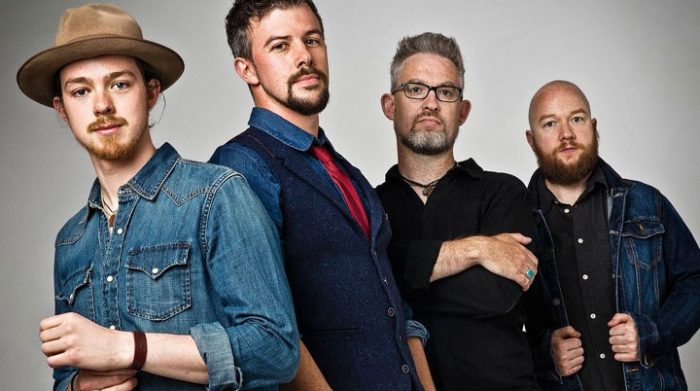 We Banjo 3 are actually a quartet made up of Enda Scahill. (Tenor banjo, vocals) Martin (tenor banjo, mandolin, vocals) & David Howey (lead vocals, guitar) and Fergal Scahill brother of Enda is a celebrated Irish fiddle player who also contributes via viola, dobro, percussion, guitar, mandolin and vocals. Known as one of the best live acts on the Celtic/ Bluegrass circuit. The band have labelled their unique blend of genres (Celtic, folk, bluegrass) as Celtgrass. Despite the band’s name banjo doesn’t dominate this album, often it’s the fiddle, guitar or standout vocal harmonies at the fore.

‘Roots to Rise’ is very much a live album recorded live on February 27 and 28 at The Ark in Ann Arbor, Michigan the audience contribution is made fully part of the album with its enthusiastic response evident throughout some tracks and at the end of most.The track listing is full of consistent crowd pleasers the overall high quality means it’s difficult for any particular track to stand above the others.

`Shine On`, this is an upbeat opener the vocal shines out and the Banjos and fiddle join together with the crowd clapping along. Plucked Banjo and fiddle kick this instrumental track ‘Puncheon Floor` into life from where it builds in speed and energy towards its satisfying finale somewhat reminiscent of duelling banjos from the film `Deliverance`. `John Brown’s’ starts with fiddle slowly but soon speeds up to a final crescendo with the crowd fully involved and joining in. The fiddle and banjos compete with each other fiercely the result unclear in the abrupt ending. `Prettiest Little Girl` is a lively vocal track with rousing fiddle and banjo solos, the track then morphs into a version of Stevie Wonders `Superstition` or as sung at times “superstitious”.

‘Roots to Rise Live’ is a good recreation of the real live experience and a great introduction to the music either as nostalgia or the next best thing to being there.