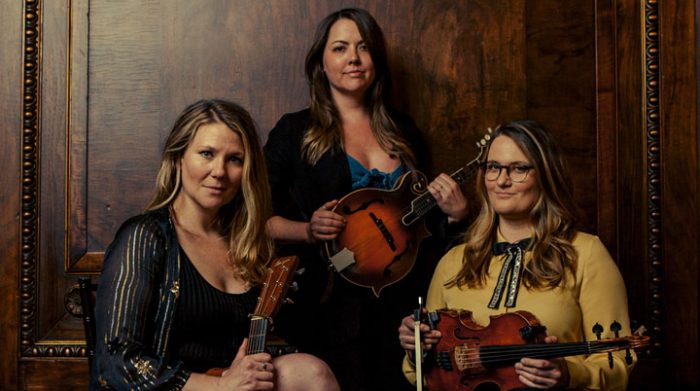 Oxfordshire based ensemble with a fifth set of niftily played trad, three girls and one bloke. The highlights here are the nimble playing of the harp which weaves well with guitar and bouzouki and then some really strong female vocals. The jigs and instrumentals are light on their feet which creates a breezy feel, enhanced by fine production from Steve Watkins at Woodworm, the former Fairport facility. If you like your folk music straight down the line and arranged by knowing musicians who treat it with respect this is right up your street.

Going To The Well – Linda McRae.

Thought the name was familiar, Linda McRea was once a vital part of Canadian folk rockers Spirit of The West, criminally under rated, they performed great works from the early 80s through to the 00s. Here accordionist/banjo picker Linda does her best to transpose David Bowie into roots music, if you’ve never heard ‘Heroes,’ and ‘Ashes To Ashes,’ done unplugged and folky here’s your chance. Decent stab at Richard T’s ‘Dimming Of The Day’ too on an eclectic set backed by hand-picked crew from the cream of Canadian folk.

Author and since 2009 – or thereabouts – musician Blacker pens off the wall songs with humour that threads through his album to make for a varied set. Recorded in Italy, ‘Playing For Time,’ reflects his love of ways and arts European, wearing his heart on his sleeve, his hymn to the continent closes proceedings. The whole comes across as part reading, part music hall, part poetry and lots of jazzy musing. Idiosyncratic is an apt term, certainly different. For those who remember Jake Thackeray perhaps.

Really strong effort from Thompson, who’s an Australian singer writer relocated over here to often support Seth Lakeman, who, produces here an album totally opposite from his beat heavy, fiddle riffing signature sound. That’s credit to him in giving the artist distinction and to Thompson for crafting such individual and satisfactory material in the first place. His songs are story based whether that’s about an Aboriginal activist/leader ‘ Yagan,’ or ‘Avondale Heights To Sunshine,’ which tracks dissatisfaction with urban lifestyle and all the associated pitfalls. ‘Ship To Come In,’ is a rolling, choogling ode to the continuing fight for women’s equality that might have come from the repertoire of Dick Gaughan circa ‘Different Kind Of Love Song.’ Worth investigating then.

Described by some as a cross between the Pogues and the Waterboys certainly gives you a flavour of Palmer’s direction. The furrow being ploughed here regrettably falls well short of its ideal depth. Straddled somewhere between Steve Earle and Alan Hull the album’s material should paint pictures in the mind or stir the emotional well. Overall it’s a pleasant listen that may have more impact in a live setting.

Decent shot, an album bursting with Scottish character and song all buoyed by a crack session crew who know this material inside out and perform accordingly. Jim and Susie are both experienced folkstrels, he particularly so across the expanse of the folk scene and she with a fondness for the big ballads of Celtic. However they don’t stay in the trad corner that much pushing outwards to include contemporary song all the way from Burns to Karine Polwart. Thumbs up for the packaging.

Ritual and traditional music of Morocco and Algeria offered up by a group comprised of Belgian players who’ve taken from and to the source music. There are seventeen of them here grooving on melodies which have master musicians and younger generation playing the heavy rhythm, chant/poetry vocals and rubbery bounce of the gimbri lutes. Quite entrancing the album is themed round lila, a night of gnawa ritual, put together by Muziek Publique an organisation dedicated to preserving dance culture of whatever stripe in Brussels. Cross cultural fertilisation in action.

Album four from the leading female string band and one on which they’ve taken a massive stride towards the mainstream. There are guitars here that churn and bass/drums which recall Lucinda Williams far more than Bill Monroe. Lead track ‘Headlight,’ is proof that you can recall Janis Joplin and still sound down home. ‘First Song Dancer,’ is acoustic country funk whilst ‘The Odds Of Getting Even,’ has the chug and swing of Shawn Colivin. Plainly lots going on here, ambition, tradition and melody make potent partners when captured so perfectly.