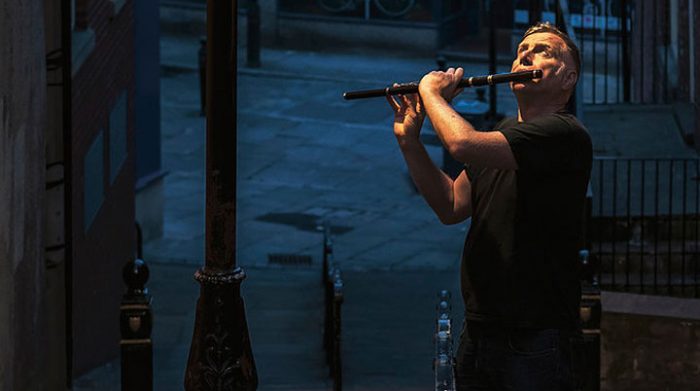 Flute player Michael Walsh was born in Manchester and raised in Stockport, where he began to play Sligo style. ‘QuareHawk’ the word is Irish slang for an odd or weird person; the album content is like its title distinctive and certainly from the leftfield.

Opening and ending the album are ‘The Lathe revival Pt1 & Pt2’ which sound like old 78’s of some ancient Irish traditional music records complete with the crackles that come with age. ‘The Shores of Loch Bran’ is a haunting mysterious song starting with gourd flute and underpinned by keyboards adding a misty background drone. The first verse is sung solo, with the second verse sung in Irish. A verse in Asturian & a final harmony duet verse sung by Michael & singer Bryony Griffith

‘The Visitor’ is a poem is spoken by Michael accompanied by flute, cello and drone guitars. Moving and emotional this track helped Michael deal with the loss of his father who died in 2017 and to whom the album as whole is dedicated. ‘Tribute to Peadar O’Donnell’ composed by Donal Lunny of Moving Hearts and is shaped round O’Donnell’s life as an Irish Republican & socialist activist. Essentially a haunting and memorable lament to the strains of Michael’s accomplished and moving flute playing.

Family is at the core of the albums rationale. In Michael’s own words “the album is about the last three years of his life Celebration, loss, moving on and finding my own voice”. An album certainly not to be classed as normal or mainstream but all the better for that in my view.