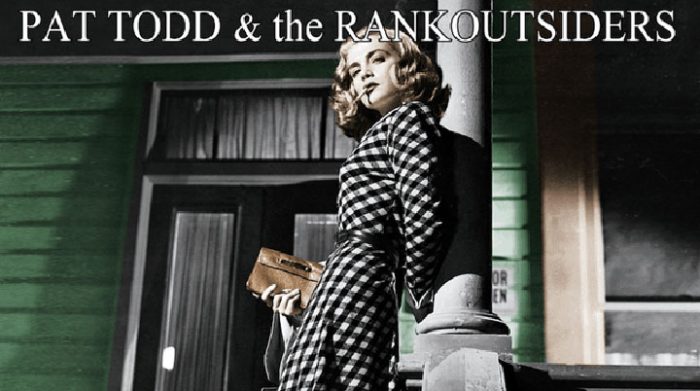 Fifth album from this LA based combo who fall somewhere between Chuck Berry and the Ramones this is rock’n’roll meant to be experienced in a hot sweaty club with a beer in hand.

You kinda know what to expect from these guys from the get go. The US punk scene spawned a host of bands in the early 80’s and the cow punk / rockabilly spin off informed bands like The Blasters, The Beat Farmers, The Long Ryders etc. So if that’s your poison Pat and the boys are going to be right up your street.

‘If Only I Could Fly Backwards In Time’ speeds out of the traps and sets the tone. Nick Alexander and Kevin Keller’s twin guitar attack ringing in your ears long after the track ends and a sure-fire set opener if ever I heard one. The high octane kick ass rock’n’roll rarely lets up and the intriguingly titled ‘The Ballad of Crystal Valladares’ follows at an even faster tempo to hammer things home. So at half time it’s Pat Todd 2 My Eardrums 0.

There are a sprinkling of country honk ballads on the album which give some respite from the onslaught ( not a criticism ) and giving the old Texas folk tune ‘Down In Old Bourne’ a reworking show the versatility of the band with some fine acoustic playing and a tasty harmonica solo from Mr Todd – his first on record apparently.

Unpredictably the final track is another harmonica basted acoustic ballad that conjures up Steve Earle. Todd declared that the album needed one quiet miserable song and a fine piece of Americana it is too. All I can say is misery loves company and it’s a track I’ll be spinning again and again.

There are no prizes here for startling originality but it’s an enjoyable romp all the same and for fans of the bands I mentioned earlier a trip to the past well worth taking.

So, crank this up really high – apart from the last track that is!