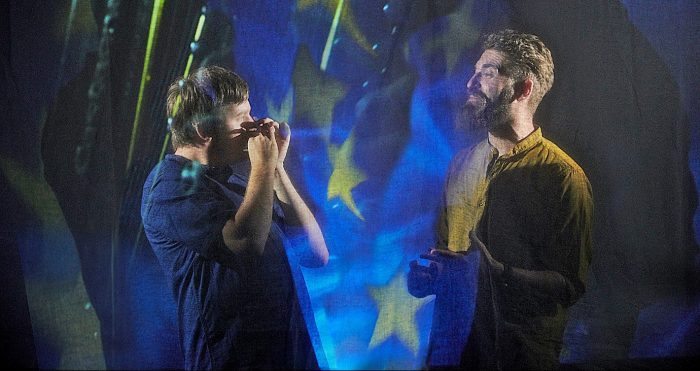 As Britain prepares to depart the European Union tonight and enter an uncertain future,  virtuoso musician Will Pound – one of the biggest names in UK folk music – has decided to let the music do the talking.

The harmonica wizard and melodeon maestro spent last summer travelling across Europe to meet musicians who will inform or be part of his forthcoming album A Day Will Come, due to be released and toured in May 2020.

Warwickshire-based Will, nominated three times for the coveted Musician of the Year title at the BBC Radio 2 Folk Awards says: “This was never a pro Remain or pro Leave project – it’s about identity, music and the subject of home.”

“The idea was to discover and celebrate the traditional music of the countries that make up the European Union. It’s been an absolute privilege to learn about the diverse folk music traditions and compose or arrange tunes influenced by them. Although I am familiar with the music of some of the countries I particularly wanted to learn about the music of Bulgaria, Croatia, Latvia and Malta.”

And Will is delighted that none other than Scottish superstar Dame Evelyn Glennie (‘the world’s premier solo percussionist’) is a special guest on the release. Says Will: “It is wonderful to get someone of her stature to be part of this project and I have really enjoyed working with her. She will be playing a Bulgarian rachenista and a new tune I have written based on Romanian Folk Music.

Joining Jenn will be multi-instrumentalist Jude Rees (Jim Moray, RSC, Pilgrims’ Way) and stand-out fiddle player Patsy Reid, the former Breabach member who has been described as ‘the most in-demand traditional fiddle player in the UK’.

The ensemble will tour venues in May 2020 followed by summer festivals. Audiences can expect a whistle-stop tour of the music of a continent – from lively Swedish polskas to upbeat Italian tarantellas, swirling Irish jigs, buoyant French bourrées, relentless rachenistas from Bulgaria and sizzling Spanish jotas.

Supported by Arts Council England, the album and show will also feature new poetry by Polish performance poet Bohdan Piasecki, Poland’s first Slam poet, he is now based in Birmingham and the poetry will be inspired by interviews with EU nationals that have made England their home.

The album will feature music from 27 member states of the EU across 14 tracks.The name of the release is taken from a speech made by French writer Victor Hugo in 1849 in which he spoke of a united Europe and the ‘disappearance of frontiers from maps and of prejudices from hearts’.  To research the project, Will set off on a road trip in May which took in Malta, Bulgaria, Latvia and Croatia.

Says Will: “It has been a real voyage of discovery to spend time with fellow European musicians and see them play the traditional tunes of their countries. Now we hope we have done them justice and created an album that does them proud.”

WILL POUND – A DAY WILL COME TOUR

Thu 14 May – University of Sheffield – https://concerts.sheffield.ac.uk/whats-on/will-pound-a-day-will-come