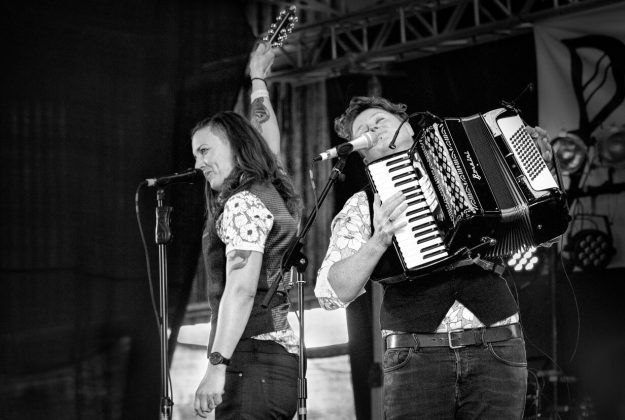 February/March 2020 sees the duo playing significantly bigger venues as they embark on their #GentlemanJack Tour. The eight date tour is a celebration of the success of their song and features two key locations in the history of Anne Lister. The duo will perform an intimate, candlelit show at York’s Holy Trinity Church, where Anne Lister and Ann Walker received the Eucharist together; which is widely viewed as the first same sex marriage.  Belinda and Heidi will also perform at Halifax Minster; the burial place of Anne Lister.

Nominated four times for BBC Radio 2 Folk Awards ‘Best Duo, Belinda and Heidi’s boundless songwriting has been described by The Guardian as ‘exceptional’ and The Independent as ‘defiant, robust, northern, poetical, political folk music for the times we live in.’ From an emotionally charged song about an elephant orphanage in Nairobi, to a joyous celebration of the Leeds cycling champion Beryl Burton, they explore, consider and connect subjects and stories in a distinctive, inventive and memorable way.

Having the originality and skill to invite comparison with the most celebrated harmony duos, from early Simon and Garfunkel to the iconic Kate and Anna McGarrigle, 6 Music’s Tom Robinson says ‘They sing together in the way families do. Normally, you only get that closeness in the voices with family bands like The Coppers or The Watersons.’

‘I have just listened to your track, ‘Beryl’, with tears in my eyes! It’s beautiful and brilliant.’ Maxine Peake