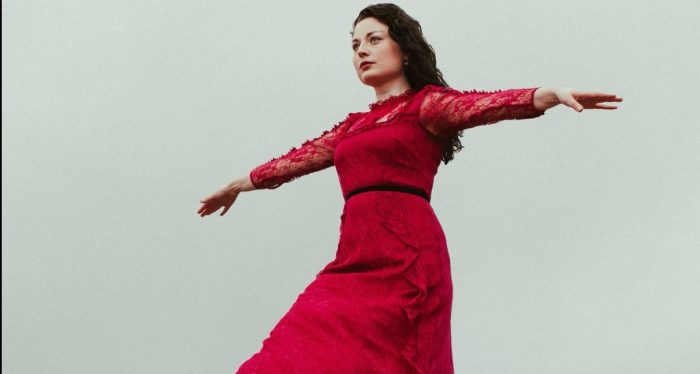 Fast rising star on the U.K. Folk/Americana scene Emily Mae Winters has that rare quality in a singer that makes critics reach for the superlatives. Described as having a voice that “stops you in your tracks” and “arresting, enthralling, tantalising” by Americana UK, Emily combines straight-to-the-heart bitter-sweetness- with her own unique passion and drama in performance. Emily Mae Winters’ exquisite songs sit between the stormy seas of folk and country influenced by artists such as Gillian Welch, Emmylou Harris, Gretchen Peters, Alison Krauss and Sarah Jarosz. Born in England, raised on the rugged coasts of Ireland, her debut album Siren Serenade produced by BBC Radio 2 award winning producer Ben Walker was released to critical acclaim earning her a host of awards. The record received widespread U.K. radio play including multiple plays on BBC Radio 2, as well as international Folk and Americana radio.

‘High Romance’ is an album consisting of all original songs and will mark a change in sound and style from her debut album ‘Siren Serenade’ which was heavily rooted in Folk. Emily grew up listening to a wide range of artists rooted in the folk, Americana, Country, rock, pop and Singer Songwriter traditions and with the making of this second album has produced a fusion of transatlantic sounds that blends the parts that she loves from these genres together to create something unique.

These new songs deal with a wide range of subjects which will all in some way examine the meaning throughout history of what the concept of ‘romance’ has truly meant. For some writers and artists, it has meant what a lot of us today recognise as roses, candlelit dinners and the stereotypical Valentine’s Day love. For others it has meant escapism, hope, loyalty, idealism, optimism, following your path and/or searching for a utopia.

Therefore, on this album you will not necessarily find a host of standard love songs. You will hear songs which deal with sunshine and rain, the movement of people, the struggles of modern technology, growing up, following your dreams, travelling/being on the road and yes of course; ‘love’ in all it’s different forms.

To quote Emily: “In one of my favourite poems by the English romantic poet John Keats: ‘When I Have Fears’, he looks up at the night sky as his dying day approaches and sees ‘Huge cloudy symbols of a high romance’. He worries that he and his pen will not live long enough to trace them all. I’ve always been a ‘hopeless romantic’ but I think the older I get, the more the meaning of that phrase changes for me.”