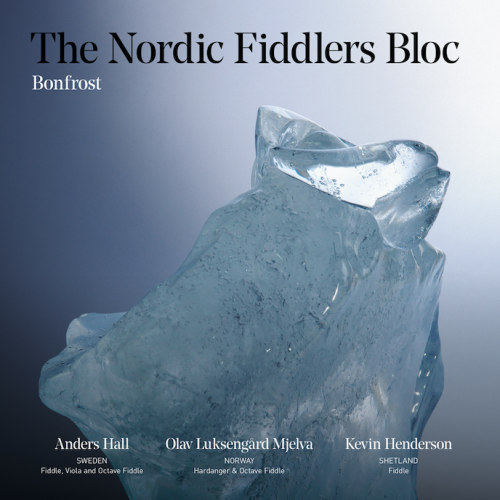 All hailing from distinct Nordic countries or regions, the fiddle playing powerhouse is made up of Kevin Henderson (Fiddlers Bid, Boys of the Lough and Session A9) whose playing is rooted in the rich heritage of his native Shetland, Olav Luksengard Mjelva – an award winning fiddle player from Norway (crowned Norway’s folk musician of the year in 2013 and winner of the prestigious Spelemannprisen award, the Norwegian equivalent of a Grammy, for his debut solo album) alongside Anders Hall who is an acclaimed exponent of the Swedish fiddle tradition and has worked with the likes of SVER & Sigrid Moldestad.

The trio combine three unique and distinctive fiddle styles to create an unparalleled sound as they expertly weave the varying components of their three musical cultures and traditions together in a hugely impressive and energetic performance.

Bonfrost is recorded ‘live’ as they wanted to capture the feel and energy of a live show. The trio used a studio that Olav runs in Os, Norway where they set up as they would do in a concert setting and played the album from start to finish. Their passion and collaborative prowess can be heard throughout, with both their unique arrangements and their on-stage connection.

Taking a slightly different direction with their third release, the trio have included a solo track from each musician as well as their normal collaborations. The focus for the group has traditionally been to make trio arrangements of the different material they each bring to the table but in response to regularly being asked if it is possible for people to hear the three individual styles, the band decided to include a solo track from each of them as a taste of their different styles in contrast to the collaborative tracks elsewhere on the album.

Kevin Henderson said on the uniqueness of their sound: “All three of us come from very rich fiddle traditions and therefore we all have very distinct fiddle styles. When we first brought these together in 2009 there was an instant chemistry and it is that chemistry that continues to drive us.”

“At the beginning it was a curiosity for us, the historical links between our three regions were strong with Shetland of course once being part of Scandinavia and so many of these influences still so evident in the culture and dialect of the island today. I’d experienced a harmonious four-fiddle sound before but the Swedish tradition of having one fiddle playing a melody and another shadowing with a harmony line was completely new to me and it was something that drew me so intently to the trio and to continue to make music in this way.”

The jamming sessions that led to the band’s conception showed that the trio not only created a unique sound, but it also had a beguiling richness to it that was created by their use of standard fiddles, octave fiddle, viola and Hardanger fiddle. This wide-ranging sound has led to them being likened to a string quartet rather than just a trio.

Bonfrost follows The Nordic Fiddlers Bloc 2011 self-titled debut album and their 2016 release Deliverance, both of which were released to critical acclaim.

Bonfrost was recorded at Klangsmia Lydstudio in Os, Norway and is released under their own label NFB Records.

Bonfrost will be available to buy on Friday 20th November 2020.