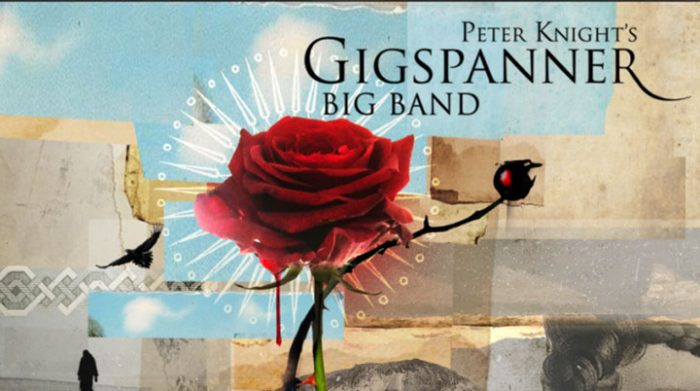 Let’s just take a moment to summarise how we get to the release of ‘Natural Invention’. Gigspanner came about as a vehicle for ex-Steeleye Span fiddle maestro, Peter Knight, to lead a folk trio with the guitarist Roger Flack and percussionist Sacha Trochet. As musical boundaries were crossed, their inventiveness led to a meeting with Edgelarks, Phillip Henry and Hannah Martin, whose own music was known for blurring the edges of folk music with Henry, in particular, bringing Eastern music, harmonica and beatbox into the frame. The net result was an appearance together at the Cropredy Festival in 2016 and a slightly low key release of the ‘Live’ album. In effect, the Big Band began as a brief side project but, with their consequent tumultuous appearances at various festivals and the arrival of ex-Bellowhead member John ‘Squeezy’ Spiers in their ranks, there is a creative line up in need an outlet for its work. So, here we are, in all its glory, the generous sixty three minutes and ten tracks of ‘Natural Invention’.

With so much talent on show, it’s impossible to capture every detail in a relatively brief review like this. Overall, ‘Natural Invention’ acts like a musical jigsaw taking the best of their individual talents and using the arrangement of traditional songs to highlight them to their best. Take, for example, ‘Courting Is A Pleasure’ which has Hannah Martin taking the lead vocal and starting with a gentle percussive introduction aided and abetted by John Spiers work before it is driven along by fiddle and, later, Phillip Henry’s guitar work. In other words, it’s a version that becomes not only danceable but almost unrecognisable from the Nic Jones’ arrangement that most will remember.

On ‘Daddy Fox’, derived from The Young Tradition’s version with a nod to Cyril Tawney, various members of the Big Band chip in with vocals as well as Henry providing harmonica before the drive of Spiers and Trochet seamlessly swings into the morris tune, ‘Not For Joe’. It typifies how the album’s music melds together the differing skills of the Big Band’s members.

Elsewhere, there is a gentle and inspired version of ‘Searching For Lambs’, a song highly rated by Cecil Sharp who collected five versions. The track ‘Haul On The Bowline’, a shanty that gets paired with a Breton tune, ‘Laride a Six Temps’ and demonstrates not only the skills of these musicians but also their wider reading of folk music. ‘The Snows They Melt The Soonest’ finds both fiddlers, Knight and Martin, offering up a sublime musical joust around this well know traditional song. On ‘Betsy Bell and Mary Grey’, the musicians serendipitously capture the current virus zeitgeist in its tale of the plague. My only (small) complaint being that the sleeve notes that guide the listener through the individual tracks don’t follow the same sequence of the record itself.

With so much talent in the band, it’s good to see that they have been careful to stay on the right side of the line and avoided becoming too self-indulgent. They’ve taken their album title from a review of the Big Band’s first record by David Kidman for Fatea. So, here’s my pitch for the next record. ‘Natural Invention’ is where talents collide in magnificent splendour. Magnificent splendour, it is indeed.