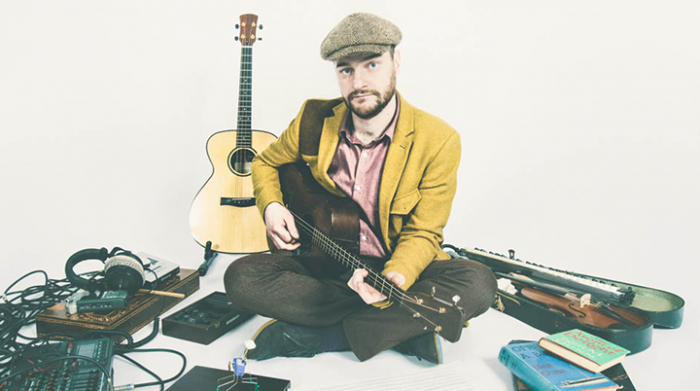 Mike Vass releases his first album of self-penned songs on 5 April, a follow up to ‘In the Wake of Neil Gunn’. An evolution into a songwiter seems natural for this gifted composer.

Fine fiddler and multi-instrumentalist Mike was nominated for Instrumentalist of the Year at the 2018 Scots Trad Music Awards. Dubbed ‘one of the most creative forces on the Scottish music scene’ he is a long-term member of “Scotland’s finest folksong group” Malinky. He has also performed in the Paul McKenna Band, in a duo with sister Ali, with Gaelic singer Kathleen MacInnes and in feted supergroup Fiddle Rendezvous.

As a producer he has masterminded albums for artists including Scottish songstress Fiona Hunter and fiddle singer Gillian Frame. But it is his beautifully crafted compositions that have put him firmly in the spotlight – the instrumental albums Decemberwell (2012), In the Wake of Neil Gunn (2014) and more recently, Notes from the Boat (2018) which saw his distinctive music performed on board his sailing boat Sweet Harmony by a collective of some of Scotland’s stand-out musicians.

Mike says he is on “a lifelong journey to explore Scottish music in all its forms” and last year he also created the musical suite and multi-media experience The Four Pillars. A commission from the Scots Fiddle Festival it was based on the four major tune types of the Scottish fiddle tradition – the slow air, the march, the strathspey and the reel. Mike’s acclaimed work captured all the grandeur of the Scottish fiddle and an accompanying album was released in December.

Save His Calm is not necessarily what followers of Vass’s music would have expected next. The semi-autobiographical song cycle blends folk, indie, jazz and pop elements in an album that could be seen as something of a cathartic creative response to life incidents.

One event in particular has been well documented – and triggered the album In the Wake of Neil Gunn. Described as “a journey of recovery and discovery” the ambitious music-maritime project was borne out of a lengthy hospital stay when Vass was diagnosed with the life threatening illness Neuroborreliosis – late stage Lyme disease affecting the central nervous system.

Reading Scottish writer Neil Gunn’s book Off in a Boat, documenting the one time civil servant’s three month long sailing adventure around the Inner Hebrides, keen sailor Vass vowed to replicate the voyage once recovered – he kept his word and the trip inspired the acclaimed album.

The shift to songs in Save His Calm has lost none of Vass’s trademark grace and innovation and shows he can turn his hand to succinct and clever lyrics.

But it undoubtedly represents a key diversion in his career – and a leap of faith. He says: “Having not sung in earnest since my voice broke as a teenager, I needed time to get to know my voice again. In 2017 I took a sabbatical of sorts to go sailing and took along my trusty tenor guitar. I practised these songs constantly as we made our way from the Clyde to the Canary Islands during the course of the summer. I think the warm climate really helped open my voice out.”

“Most of my previous output has been instrumental, rooted in folk music and traditional Scottish music, so this is totally different and has a jazz element -– the band are mostly jazzers.

“I wanted to get away from what I had done before, scoring everything meticulously and having every note exactly where I wanted it. On this album everyone had the freedom to do their own thing.” He is joined by musicians Louis Abbot (drums and vocals); Euan Burton (double bass/ electric bass), Philip Cardwell (trumpet), Tom Gibbs (piano and clarinet), Su-a Lee (cello) and Fi Vass (vocals).

The nine tracks ebb and flow through a range of moods, as they ponder the past and contour the confessional.  He says: “All the songs are fairly personal – either to me or my family and friends. But they are all people’s stories at the end of the day.”

Vass admits: “I’m a man from the Highlands and we don’t really talk about our feelings very much but I think some of those untapped emotions come through in the song lyrics.”

The album opens with the soul-searching They Never Found Me about the fragility of life and all those age old questions – who we are, where we are headed and which of our old selves we have to leave behind on the journey, which is often out of our control.

Vass’s understated, soothing voice continues with Done with Calling You, a tongue-in-cheek song about a break-up of a long relationship – the fulsome melody enhanced with piano and trumpet.

The tempo slows for the dreamy The Rainbow of Your Last Days, a song about self-destructive habits while Just Enough to Let the Light In is a profound, rueful song about being haunted by past choices.

Dylan Thomas’s life-affirming ‘Do Not Go Gentle into that Good Night’ poem is recalled in the stand-out track Gates of Saints – a gorgeous trumpet –infused melody and poignant lyrics inspired by an elderly gentleman Vass met during his own hospital stay.

The cello-embroidered Clutching at Straws is a supernatural tale of long lost love while the waltz-tempo Fly is about uncatchable transient love – a lighthearted story of a holiday romance played out like ‘ a waltz through Europe’ with Philip Cardwell’s trumpet in full flow.

As I’ve Grown Older is described as ‘a song inspired by unanswerable questions’ – a compelling track with emphatic crashing rhythms.

The final track Walk with me and meet my children – is a searing song that tries to make sense of the far-reaching effects of trauma and inexplicable loss. It’s an affecting and beguiling big production number.

Free form and fascinating Save His Calm marks a new path for one of Scotland’s most respected and original acoustic composers –it’s an ‘all life is here’ work that has the ability to burrow into your thoughts and draw you for a while into an intriguing, sometimes raw personal world while at the same time reassuring and resonating in an ‘Everyman’ way.

Save his Calm is released on April 5 on the Unroofed Records label.