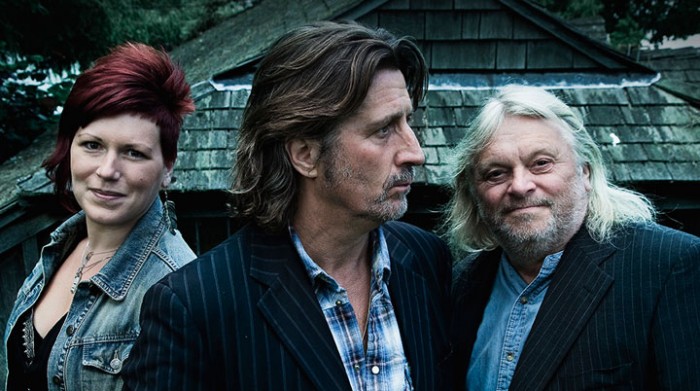 There can be few acts in any genre that would opt to open a concert with a song that their audience had never heard them perform. Yet this is precisely what Show of Hands did on Thursday evening amidst the art deco opulence of the Forum; then proceeded to showcase a succession of beguiling new compositions throughout their entire first set! It is of course Show of Hands’ confidence in the calibre of their own material as well as the staunch support they enjoy amongst audiences that underpinned this decision.

The duo of Steve Knightley and Phil Beer, abetted once again by the atmospheric double-bass playing and plaintive vocals of Miranda Sykes, presented their audience with music that took its inspiration from the songs they heard as teenagers in the folk clubs of Devon. Their new music marks something of a departure from recent material that has made increasingly more explicit reference to American folk idioms. Knightley’s facility as a songwriter able to vividly capture time, place and narrative in song was amply displayed in the new material, which will appear on new album ‘The Long Way Home’ in January 2016. Amongst the most memorable was ‘Breme Fell at Hastings’, written for the BBC series ‘The Great British Story’. Opening in arresting fashion with Anglo-Saxon words intoned by Knightley, the song focuses on Breme, a local farmer caught up in the Battle of Hastings. The song presents his death at the battle as emblematic of a lost Saxon cultural identity. Contrastingly the spirited ‘Walk With Me (When the Sun Goes Down)’ conveyed a life-affirming zeal that will surely make it a favourite with audiences for years to come.

Following a short interval during which ale was hastily consumed and albums briskly snapped up by an appreciative crowd, Show of Hands returned to the stage for a set comprising some of their best loved material. Many of the songs were introduced with Knightly and Beer’s wry anecdotes about the circumstances in which the songs were written. The audience was also treated to an entertaining tale of how during a 2006 tour Show of Hands encouraged audiences to vote for them in a Devon County Council competition to determine history’s greatest Devonians. The pair duly outvoted the likes of Agatha Christie, Sir Francis Drake and Charles Babbage to scoop the award, to the apparent bewilderment of the competitions sponsors.

Amongst the highlights of the second set was the wistful ‘Santiago’, a song originally performed in collaboration with exiled Chilean musicians. This was one of several occasions in the evening when the massed voices of the audience combined with those of Knightley, Beer and Sykes to poignant effect. Trenchant social commentary was to the fore in the enduringly popular ‘Country Life’ and the banker-baiting ‘AIG’; an acronym that in Knightley’s hands was redefined as arrogance, ignorance and greed. One of the most affecting moments of the evening came with the first encore in which, without amplification, Knightly sang Ralph McTell’s ‘The Setting’, a pensive tale of a man accompanying his departing sister to a train station as she sets off for an uncertain future. This was intermingled with Beer’s rendition of the traditional ‘Mary from Dungloe’. The two songs were so sensitively combined that the audience appeared mesmerised.

For many there remains only one way to conclude a Show of Hands concert and the band did not disappoint. A rousing performance of ‘Cousin Jack’ filled the Forum and saw audience members still singing Knightley’s celebrated song of exiled Cornish miners as they departed into the streets of Bath.