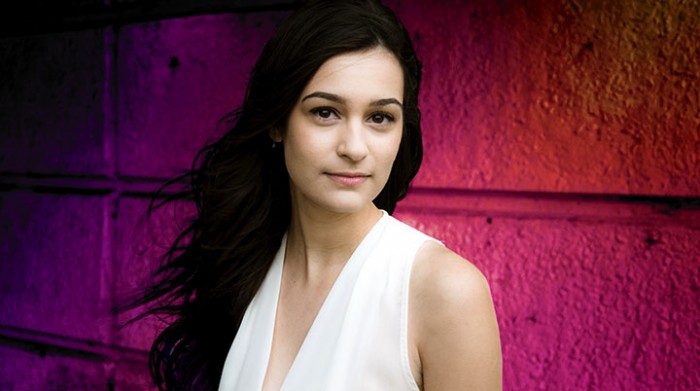 Kelly Oliver, a familiar sight on our pages, is one of the new breed of bright young folk inspired musicians who stands out from the crowd with her ‘golden vocals’ and feisty lyrics. We have been reporting on her progress with interest  over the last two years. We remarked that she was ‘getting on everyone’s radar, someone pretty special’ when her debut This Land surfaced in 2014.

The reaction to the single releases ahead of her second album Bedlam, all gaining national radio and press support via The Telegraph ‘distinctive and breathtaking vocals’ and BBC Radio 2, Bob Harris ‘beautiful, pure voice… Kelly Oliver is an emerging voice in British Folk’,  BBC 6 Music’s Chris Hawkins ‘fabulously gifted, something special’ and the national network of BBC stations thanks to Mark Forrest, has been impressive. Bedlam looks like it’s going to take this refreshing artist to the next level and Kelly is embarking on her first 18 date national headline tour, which incorporates the release date of 6th March at Hitchin Folk Club, with Isambard Folk Award winners Said the Maiden as special guest, and culminates with a return to River Cottage in Devon, where Hugh Fearnley Whittingstall’s clientelle are evidently enchanted, as there’s only a handful of tickets left for 31st March.

With a critically acclaimed modern take on the acoustic folk tradition, Hertfordshire born and bred Kelly is bringing folk right up to date with clever and contemporary lyrical content, and accompanies herself with often intricate, beguiling arrangements showcasing accomplished guitar and harmonica skills. Despite not coming from a musical family and only starting to perform her self penned songs relatively recently in May 2013, Kelly has been making significant waves on the new music scene since releasing her first EP on Folkstock Records in November 2013. Her debut album followed in October 2014 and was greeted with unanimous praise including an Album of the Year award from Folkwords, an Emerging Excellence Award from Help Musicians UK and a listing in the Telegraph’s Top albums of the Year for 2014. 2015 saw Kelly gaining some mainstream appeal thanks to support from BBC Introducing and won a Best Female Singer in the cross genre NMG Awards in October of last year, and had two live slots on London Live TV ahead of gigs in the capital.

Her second album, Bedlam, is gaining traction and a raft of new admirers, and is being released on March 6th but is available at all the gigs on her tour. It has been produced by three different producers working with Kelly to create a surprisingly seamless listening experience, given the amount of external input. Kelly employed the talents of Nigel Stonier, with backing vocals from Thea Gilmore on Rio, and fiddle and backing vocals from Ciaran Algar on Jericho,  Stu Hanna from Megson on four of the tracks, some of which also involve Debbie Hanna on backing vocals and Kelly’s original producer from This Land, Folkstock Records’s in house producer Lauren Deakin Davies, with whom she co produced a further four stripped back songs in which Lukas Drinkwater adds sumptuous double bass. Dates include prestigious venues such as Gloucestershire’s The Convent, the Bristol Folk House, Leicester’s The Musician, Stafford Gatehouse Theatre, as well as cool indie venues such as Birmingham’s Kitchen Garden Cafe, The Green Note in London, Coventry’s Big Comfy Bookshop and Norwich’s The Bicycle Shop, and a special showcase organised by Rough Trade Records in Nottingham.

The Norwich date, 29th Feb has another Folkstock artist as special guest, Marina Florance to make an extra special evening. The South Woodchester venue, The Convent, hosts Kelly on Good Friday 25th March. This is a unique gig because Kelly is performing with a band that night, an exciting and much anticipated opportunity to hear the most accurate reflection of the tracks from Bedlam on the tour. Kelly’s band will incorporate BBC Radio 2 Folk Award winner Niall Murphy, Lukas Drinkwater and Lauren Deakin Davies and the performance will be available to stream on the night in high quality TV definition from multiple cameras via the Convent’s Netgig service.

With a first play on Mike Hardings Folk Show last weekend, and superb festivals lined up including Folk by the Oak, Secret Garden Party and Bob Harris’s first Under the Apple Tree Roots Festival, 2016 looks set to be an exciting year for Kelly Oliver.

All Kelly’s dates can be found on her website http://kellyoliver.co.uk/