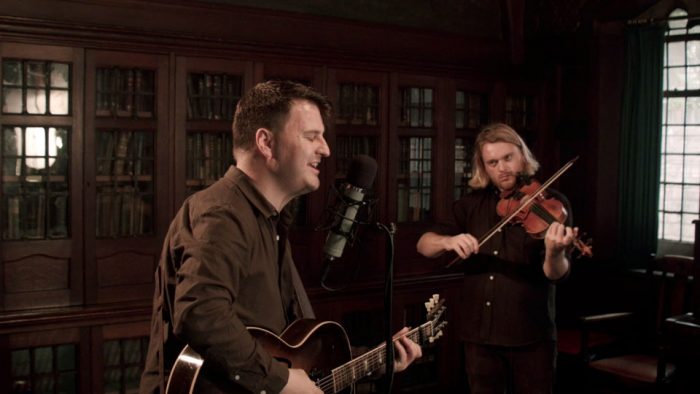 Jim Moray is amongst England’s best loved folk musicians, taking traditional songs far beyond the borders of the folk scene. He is the winner of five BBC Folk Awards, and his albums can truly be said to have changed the way traditional music is presented. His seventh solo album The Outlander was released in October 2019 and showcases a rawer, more intimate sound.

He is collaborating on this tour with Tom Moore, who is one of the standout violinists of his generation, drawing on traditional, electronic and baroque music to forge a style of his own.

Born in the early 90’s, Tom grew up in Norfolk where he began learning Suzuki-method violin aged four. As the son of folkies he constantly ended up at pubs, gigs and festivals playing the fiddle. Meeting  Archie Churchill-Moss and later Jack Rutter in his early teens, they toured extensively as a trio from that point.

Tom has since toured professionally playing violin and viola (and occasionally drums and electronics) with numerous acts from the British folk scene including his friends Archie and Jack as  Moore Moss Rutter, Nick Hart, John Dipper, False Lights, Jim Moray, Maz O’Connor, Jimmy Aldridge and Sid Goldsmith. Several of these collaborations have been nominees or winners at the BBC 2 Folk Awards.

Their tour starts today in Cambridge… for a full list of dates and ticket links visit: