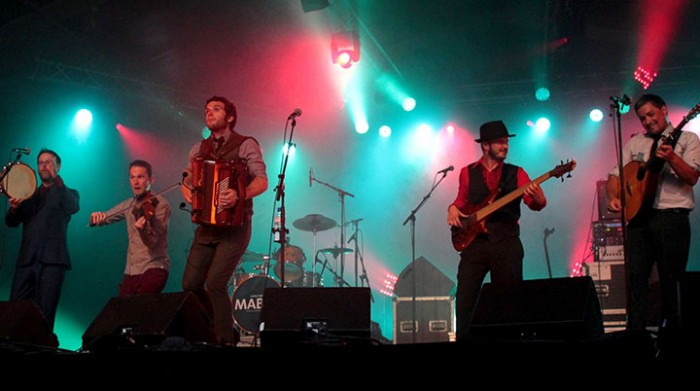 Does the prospect of a new album and tour set you itching to get out there and share the new material?

Absolutely! We’re always keen to play, but in this case there’s an added excitement, as a lot of the material is brand new for us as well as or audiences. So our tour gigs are different every time as the new tracks start to evolve into their new, live context – that puts a real edge on our appetite to play.

Is it hard to balance out new material in the setlists with old favourites?

We do have some pretty heavily-played tracks that somehow still seem to command their own place in the live set, whatever new material we produce. On the other hand, there are some that we’re quite happy to shelve – we can usually tell when a new track overtakes an old one in worthiness!

What has the recording process been like for the new album?

Very different to anything we’ve done before! Because of our challenging geography and individual schedules, we decided to record The Space Between in several different studios – that can have both advantages and challenges!

One good thing is that you can make the most of people’s specialities: an engineer who can make drums and bass sound phat’n’wicked is not necessarily going to be an expert in capturing the subtleties of acoustic melody instruments, and vice versa – so if you use both, you can tap into their different expertise.

Do you find yourselves working together differently as you rack up the albums and live performances?

One noticeable difference is that we have got more focussed. I guess that, years ago, we could sit around as long as we liked, arranging and re-arranging music – but these days, we have five partners and seven kids between us, as well as countless other projects that the individual musicians are involved in, and the logistical challenge of bringing five musicians together from across four different countries!

So when we do meet, we have to make the time count, and produce results we like on a short time and with a minimum of fuss. But the fact that we’re more experienced makes that easier too – and that we know how to work together efficiently by now!

How much exploration and improvisation goes on in the studio? Or do you have the tunes locked down before stepping in there?

It was about half and half on The Space Between. Some of that material has been honed on stages up and down the UK – though even then, the studio does give you a chance to put it under the finest microscope, and maybe to approach it a little differently. Other sets and songs were very much put together as we started recording, and that gave them a very fresh and dynamic feel when we were recording.

Where has the inspiration come from for this album?

The basic inspiration is the same: we want to make music we love, to the best of our ability! Jamie continues to draw the inspiration for his compositions from the music of all the Celtic countries and well beyond; and individually, we take our inspiration from a really broad spectrum of music – which you can often hear in our arrangements.

More songs on this album?

Oh yes! There are three songs out of eight tracks. ‘The Space Between’ is the title track, a song about the void in which musicians can live sometimes, when travelling from one concert to the next, floating around in a vacuum away from home.

‘Returning From Where I’ve Never Been’ has a more political theme than we’ve dealt with before. It’s about working through your disillusionment with the state of the world, to bring yourself to a point where you can be active, stand up and have your say.

And the album closes with ‘Yr Ennyd’, another Welsh-language collaboration between Jamie and iolo. ‘Yr Ennyd’ means ‘the moment’, it’s a reflection of how the choices we make in a second can shape our futures.

Any message in the new album title ‘The Space Between’?

Take your pick! The idea originally came from the fact that neither our music or our musicians are rooted in one place – the band lives in the space between the Celtic cultures, doing our own thing.

It also has a relevance to the nature of trad tunes: it’s the ornamentation between the notes that gives it its distinctive character.

And then that theme has inspired two of the songs too, so there are plenty of references to it all round!

Which countries have you particularly enjoyed performing in?

This might sound cheesy, but every country has a different feel, different highlights, and the audience is different everywhere we go.

Having said that, we have a big soft spot for Brittany – not only for the awesome food either! We’ve played there so many times, and particularly in our formative years, that it almost feels like going home every time we play there.

We’ve loved being in Scotland so much this year too, including The Hebrides and Shetland, they’ve been fantastic experiences! Not only is it a stunning country but the trad scene is so strong and vibrant there, it’s inspiring to see.

And of course, we’d have to mention the incredible Rainforest World Music Festival in Borneo last year – in case the title doesn’t say it all already, it was a week of hanging out with amazing musicians in a glorious setting!

How do you prepare for a tour, musically and mentally?

There’s so much to think about, especially when you book and arrange your own tours, that you have to spend a lot of the preceding months glued to your laptops. It’s easy to get lost in the preparations – but as soon as you all meet up; when the gear is loaded and the miles start to fly by; and of course, when we get to play night after night in so many lovely places, it makes all the preparations worthwhile.