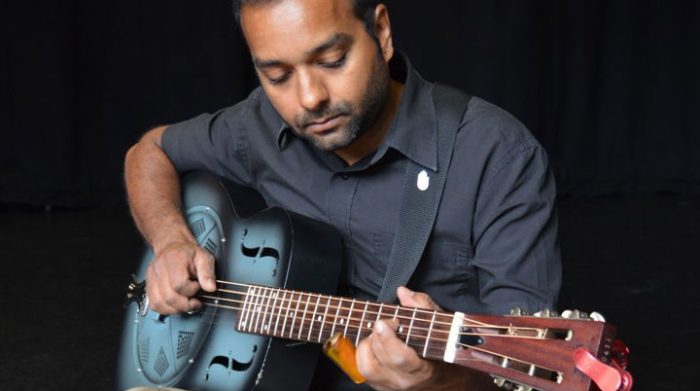 We recently interviewed Ajay Srivastav about his great new album Karmic Blues, which is a stunning blend of Delta Blues and Indian Folk. We wanted to find out how he found the synergies between cultures and the path his own life has woven to bring them together…

Reading Ajay’s bio on his website reveals quite a career as a session musician working with some big names and then as an artist in his own right with a varied raft of projects.

“You don’t realise it when you are doing it, but it’s the same with all musicians, we tend to go from project to project and say ‘well that’s that’ and not talk about it in a big way – a lot of sessions musicians are like that”

Ajay’s break came when he was still in his teens, answering an ad for a recording studio assistant who was also a good musician.

“I was just a young kid and through that I got to work with a lot of their guys, they had Jamiroquai, Brand New Heavies, it was like the late nineties so the whole Brit Pop thing was happening and so all of those bands would come in, Gregory Isaacs was signed to one of their labels and that was my start!” 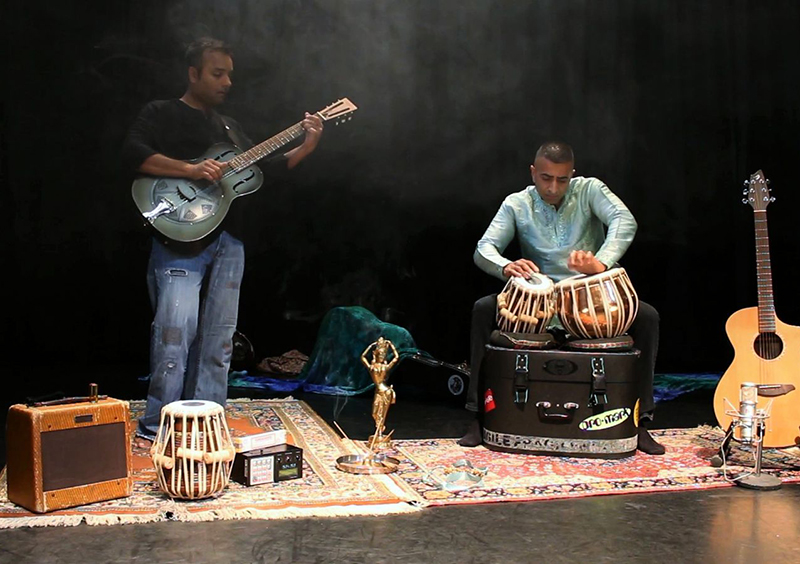 Despite his youth he took his job very seriously “I would go into the studio and make sure everything was hooked up, mic up the drum kit, keep myself to myself by the tape machine or the desk if there was another engineer in and not try and hassle any of the other guys who came in!”

Recording requires a sense of discipline and a methodical way of working, especially so in the analogue days before digital recording came in. “I consider myself very VERY lucky that I was literally on the last days of analogue tape, I was taught how to line up each track and all that – they had a Studer 24 track. And you’re right it was a different discipline and I am really grateful for that.”

There was undoubtedly a benefit to bridging that gap between analogue and digital; the skills are the same, just the tools have changed.  The invaluable skill that came from working analogue was the economical fact that inches of tape cost money, a sense of urgency or looming deadline can often spur on the creative process.

“The analogue days with the limitations that we had pushed our creativity to the max, I sit at Logic on an Apple now, and the choices are infinite. Back then, If I wanted to achieve the sound that was in my head, I had to really work wonders and change the structure of the studio to achieve it.”

Around 2004/2005 Ajay started writing in Hindi, which he speaks as a second language

“I started just as an experiment, doing stuff here and there actually at the behest of a woman that I really liked. She liked the song so I recorded it in the studio, along with two others I had by then written. Then I thought I may as well send them to the UK radio stations. The Asian Urban thing was happening in a big way at the time and my song got picked. I did a video for it as well, which got rotated on channels and I started getting into that British Asian circuit as a performer for the first time.”

The British Asian scene was oriented towards Dance, DJ and rap, so Ajay really stood out as being guitar based. Soon after interest from record labels followed:

“I got labels from India contacting me saying ‘are you doing an album?  Would you like to do an album with us?’ “

The label that Ajay decided to go with was T Series, one of the biggest in India. “So I did the album, actually recorded in England, and then I went out to India, and I was out there for a year and a half, mostly in Mumbai.”

To say that there was something of a culture shock is an understatement “It was crazy, I knew it was going to be crazy but I wasn’t expecting quite that? Let’s just say it goes at its own pace, it moves at its own pace and I was an alien there, I’ve got to be honest it made me realize I am quite British in my approach to things! It was a big reckoning for when I started to do session work and writing with other music directors – they roll in a different way over there – there’s no credits, there’s no royalties, but I was young and I was keen. I did lots of live shows and worked with film stars, but at the end of the day it didn’t appeal to me.”

Bollywood has gone from a national phenomenon to an international cultural juggernaut. The classic era could be defined as the 50’s to the 80’s where it was more orchestral, since it’s rise in popularity since the 90s it has veered more towards the urban pop sound “you hear stuff coming out of Bollywood now and you can’t decipher it from stuff you hear on Capital Radio in London – apart from the language, the production is the same, all pushed and compressed, the same beats.” 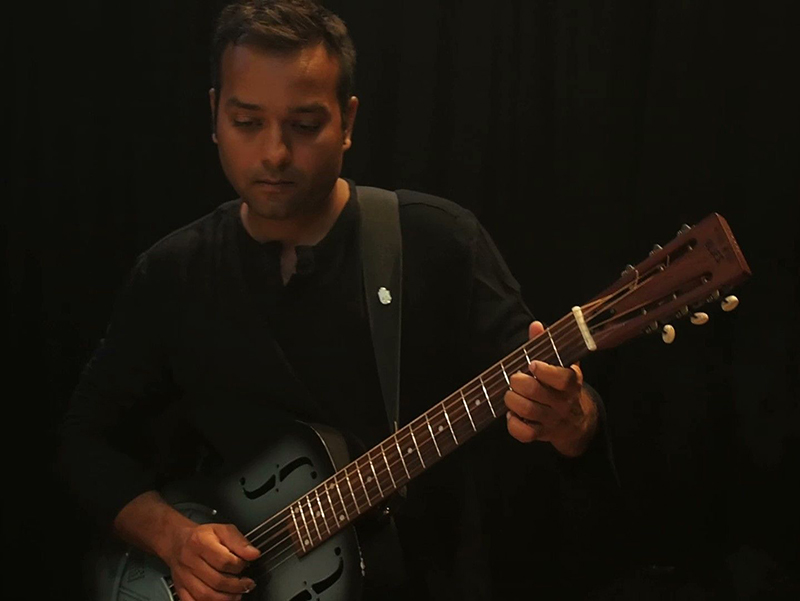 The Bollywood scene probably isn’t that conducive to an independent artist wanting to develop their career – “A lot of people said it’s like the old Hollywood used to be in the 30’s, they don’t even have an independent music scene there. To break into it you work with a music director uncredited and then you kind of network your way in whatever manner you can and get a film – that’s the journey.”

Nepotism and shall we say, a rather loose idea of what intellectual property is, define the system. Ajay returned to the UK with a desire to do something with his Bollywood experience, but on the scene that he grew up with and on his own terms.

And what terms… “I’m about the blues and the roots scene, so I put together a band that was soul funk, essentially based on the late 60’s early 70’s legendary bands. But I would take a Bollywood song and think ‘how would Ray Charles play this one?’ or ‘how would James Brown do it ?’ “

Botown is the name of the band and he brought the big live interactive band experience to the British Asian scene. It was an experiment that paid off.

“I put together that band as an eight, with drums, percussion, two piece horn section, myself on guitar and vocals and a female vocalist – and we basically did very well, we’re still going! We kicked off at the Watermans Art Centre in Brentford.  They are really well known for helping out young music and theatre acts and nurturing them. So they gave us a couple of nights and we did really well, we sold out because they promoted us well and of the back of that we obviously got more music venues. Now every year we have our regular tour from London, through Midlands up North and its just built up a following. We’re taking songs from Bollywood and classic soul funk albums and fusing them.”

But what is the cultural meaning of Bollywood music? “Soul music was always very much music of the people and I say Bollywood music is the soul music of India, it almost has the same journey because it kicked off just as India got its freedom. There were elements of that struggle in the early days, there was experimentation and it was very much, particularly in the 60’s, an expression of working class people in India. You could argue that both musical styles have almost become parallel now. Modern R & B is very slick, talking about a higher lifestyle with limos etc and Bollywood is virtually the same, middle/upper middle class, talking about having this or that. So both have had the same journey interestingly enough.”

Ajay’s love for simply creating music is infectious, and he barely draws breath before launching down another tangent. Not content with being a musician and performer he has now jumped into Musical Theatre. “My wife is a writer and she said ‘Look, let’s do this two week course at Stratford Theatre, let’s just do it, we might work on a project together, me as a writer, you as a musician/songwriter’ so I was like okay cool.  As a result we now have two musicals in development! One is based in 1920’s clubland and the other around the music of Bollywood in the 70’s.  It’s really cool as a songwriter to approach a project in a completely different discipline, you have to write from each character, you have to tell a story,  it’s a whole other deal.“

But what about the Blues? With this many irons in the fire I wondered how he had time for another project with the Karmic Blues album? “It just came to this point where I was asking ‘Where am I?’ ‘Who am I?’ and what have I got to say completely as a person, without any agenda and without wanting anything?”

Ajay was brought up as part of a traditional Hindu family, yet his parents sent him to a Catholic school and encouraged him to get involved. Then he went on to do a philosophy degree at university. “When you are brought up in a culture, you go with it, you reject it a bit, and maybe come back to it, and I came back to  It and started reading the Veda’s, but also books that analysed the sociological aspect of vedic culture.”

“I got to a place where I can choose, and I even tell my Mum now ‘look you do this tradition but it’s not what you think it is.” And I bet his mother really appreciates that…

No she doesn’t at all! But now I have learned, and I accept the stuff they do as a cultural thing  – I’ll get involved with it happily.”

So how does the Blues factor into that? “Whilst I have always been writing songs, I have never really just said what I want to say.  My wife helped as well, saying it was about time I wrote my own songs again.”

“I think I was a bit scared initially, but I realised that I do music because I enjoy doing music. Doing a project for the sake of doing rather than focusing on what the outcome would be really appealed to me. I think musically, spiritually and  personally I was just ready to bring everything together in myself.”

It has to be said that the album doesn’t feel as if Ajay was consciously setting out to fuse cultures, styles or genres. It has a level of honesty in the writing and delivery that backs up what Ajay has been saying.

Part two will be online next week, check out our review of Karmic Blues here in the meantime.