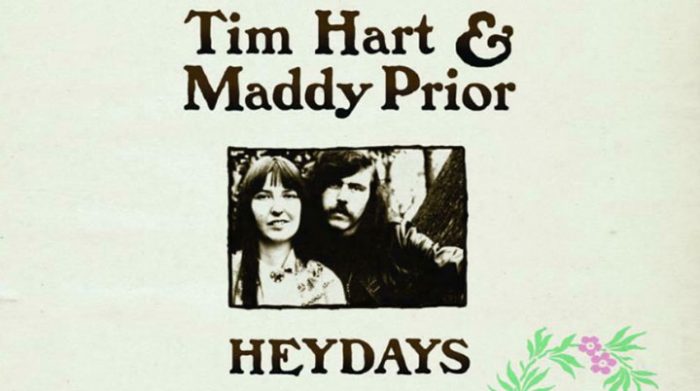 All Our Yesterdays. As record companies empty their vaults or eager younger labels find long lost master tapes in dusty cupboards, reissues are taking more space on the release sheets. Here the Spiral Earth review team back track in the name of fair hearing and sound judgement.

Hard to believe it now but these naïve, charming songs were the sound of bright young things on the late 60s folk circuit. Recorded in a couple of afternoon shifts at Tony Pike’s decidedly lo fi studio back in 1968 and 1969, ‘Folk Songs Of Old England Vol 1 & 2,’ have been endlessly recycled, sampled and put in a variety of sleeves ever since.

Joining them here to complete the Hart/Prior catalogue is 1971’s far superior, ‘Summer Solstice,’ recorded with a bigger budget, studio and decent session musicians. Maddy Prior once told me that despite the many versions that had appeared she and Tim had made no money from the records whatsoever, yet undeniably it was a cache to have an album issued in the day when the folk boom was booming. Hart & Prior of course shot through the folk scene like a dose of salts and within a mere two years were ready for new adventures hinted at by summer 69 discussions with the restless, creative spirit that is Ashley Hutchings.

The straight trad and simple acoustic approach of those first two albums were the soundtrack to their ascension though it’s too blasé to dismiss them lightly: Tim and Maddy took pains to build a unique repertoire they’d spent time and effort researching. ‘Vol 1,’ has decent grist, ‘Maid That’s Deep In Love,’ ‘ Dalesman’s Litany,’ ‘Adieu Sweet Lovely Nancy,’ to name but some, Maddy’s voice is superb from the off, that wonderful soaring English rooted tone, Tim Hart far more mannered and folksy. By ‘Vol 2,’ they were less stiff, surer, more relaxed and comfortable in their own shoes, the material raises the bar by several notches, ‘The Gardener,’ ‘Copshawholme Fair,’ would eventually make it into Steeleye Span’s repertoire, yet others ‘ The Horn Of The Hunter,’ ‘Queen Eleanor’s Confession,’ ‘Bold Fisherman,’ have been left to gather cobwebs, forgotten performance wise which is a real shame as each is strong and characteristic.

The duo format ran alongside early Steeleye, it was the cause of some consternation within the original line up but when that fractured and Tim Hart’s rebuild included Martin Carthy an established solo artist and Ashley began flexing his producer’s muscle time for side lines was tolerated, thus ‘Summer Solstice,’ which is by some distance the finest hour of Hart & Prior. With the likes of Andy Irvine, Gerry Conway and Pat Donaldson from Fotheringay providing gentle, appropriate backing how could it be anything else? Overseen by Span’s manager Sandy Roberton, there are classics, ‘Dancing At Whitsun,’ solo Tim with a sweeping Robert Kirby string arrangement, ‘False Knight On The Road,’ not the Steeleye version, ‘ Three Drunken Maidens,’ and of course ‘ I Live Not Where I Love,’ the song which when opportunity allowed Tim and Maddy always returned to after he left Steeleye.

Issued in this form in 2003 by Castle as a collection ‘Heydays,’ has long been away but now wisely picked up by the ever diverse Talking Elephant you can hear again the genesis of auspicious beginnings.