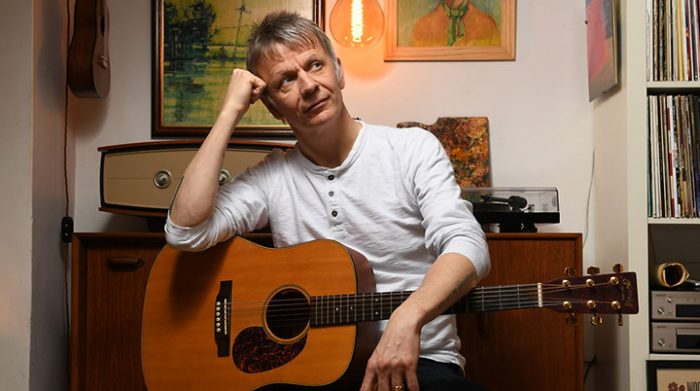 Jamie Freeman has announced a new album ‘Dreams About Falling’ released on May 17th via the Union Music Label. Check out the video to the first single ‘All In The Name’…

“Dreams About Falling alludes to the fine line between flying and falling, succeeding or failing. Some of the songs are about childhood or upbringing, how that shapes an adult and how they remember and deal with those memories. That feeling of doing something exciting and scary, or waking from a dream just before you hit the ground.”

He is on tour in April, dates can be seen here.

And here is the press release:

Jamie Freeman returns with perhaps his most startlingly honest and remarkably vulnerable album yet, with the release of ‘Dreams About Falling’, in May 2019 via Union Music Label. Freeman skillfully tackles subjects such as parental expectations, childhood potential, and facing up to the possibility of falling short of those aspirations. These themes may be further understood when the context of Freeman’s talented family is brought into the picture. With a BAFTA and Emmy award-winning brother, Martin, and Frazier Chorus indie-dance musician (signed to 4AD, Virgin) brother, Tim, one can imagine that the family outlook has always been to ‘aim high’.

Jamie Freeman has found his own path, however, and become a respected figure within the Americana music scene after releasing his debut record ‘Just You’ in 2011, follow-up ‘100 Miles From Town’ in 2013 (under the name The Jamie Freeman Agreement) and EP ‘Hasia Dreams’ in 2017, all to critical acclaim from the likes of Americana UK, RnR, Maverick, FATEA, and more. A testament to the reputation Freeman has built is the impressive roster of collaborators and producers that have lent themselves to his projects; most recently Jamie has worked with the likes of Angaleena Presley, Mark Chadwick, Larkin Poe, Wild Ponies, Ben Glover, and Michael Logen.

Freeman’s list of co-writers and contributors on ‘Dreams About Falling’ reads like a who’s who of Nashville’s finest. One particular highlight is ‘Down Range’, a heartbreaking tale of a Gulf War veteran returning to his wife that the Pistol Annies singer and solo artist Angaleena Presley duetted with Freeman on especially for this album. Presley actually co-wrote one of the final tracks on the record ‘I Miss Those Bars’, which Freeman explains is, “about the fear of having to fend for oneself, even if that freedom is what we desire. If we attain that freedom how will we cope? She has written and talked about hardships in her family to do with the opioid epidemic leading to addiction and prison. I had my own second-hand experience with alcohol.”

‘Down Range’ is swiftly followed by the equally poignant track ‘The Fire’, a song co-written by Ben Glover whose latest release ‘Shorebound’ won UK Album of the Year at the UK Americana Awards 2019. The track itself was written after the Grenfell Tower fire disaster in 2017 and uses powerful imagery to invoke moving scenes of spirits, smoke, and betrayal. On its creation, Freeman has said, “I didn’t want to write a political song, and I didn’t feel I had the authority to write *specifically* about Grenfell, but I wanted to honour the event and the people, so we wrote about the physical being of the fire itself; an unfeeling force that simply does what it does.”

Jamie’s commitment to music doesn’t end with his own releases. Freeman produced the critically-acclaimed ‘Not Waving But Drowning’ and ‘Dead Stars’ by The Self Help Group along with many other projects including the Noble Jacks debut ‘What The Hammer’ as well as taking on the role of drummer for Sam Outlaw and MD for Angaleena Presley’s UK touring band. He’s also a member of the Americana Music Association UK – working as their designer and volunteer, something that takes up a lot of his time and energy, but that Freeman is extremely dedicated to. “I like to take a ‘high tide floats all boats’ attitude to helping fellow musicians”, he explains.