The Little Unsaid began life when West-Yorkshire born producer and songwriter John Elliott started recording music in his garage with an old PC and a £5 microphone.

In the years that followed he has toured the UK and Europe extensively, performed at major festivals including Glastonbury, and received regular radio play from the likes of Guy Garvey and Iggy Pop on BBC 6 Music.

With regular collaborators Tim Heymerdinger (drums), Alison D’Souza (strings and FX), Mariya Brachkova (Moog bass and backing vocals) and Sonny Johns (bass and electric guitar), The Little Unsaid signed with Reveal Records and released Atomise in 2019. The album was met with across-the-board critical acclaim and the cathartic performances on the launch tour cemented the band’s reputation as a must-see rising live act. 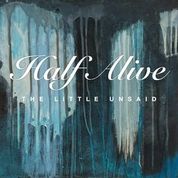 As well as working on the follow up to Atomise with The Little Unsaid, John is also regularly working on several collaborative projects including a new refugee story-inspired album by alt-folk songwriter Tobias ben Jacob (of Jacob & Drinkwater), and composing music for a new play by British and international touring theatre company Out of Joint. John also launched the RELAY project during lockdown, a collaborative covers album series featuring artists including Frank Turner, Billy Bragg and Fiona Bevan, and raising money for Music Venue Trust’s #SaveOurVenues campaign.

Their new single Half Alive is a hazy alt-folk daydream, a meditation on mortality and lifelong love sprinkled with timeless country-ballad images that tangle like memories; desolate landscapes, snow-dusted pine trees, and bittersweet snapshots of a turbulent relationship through time.