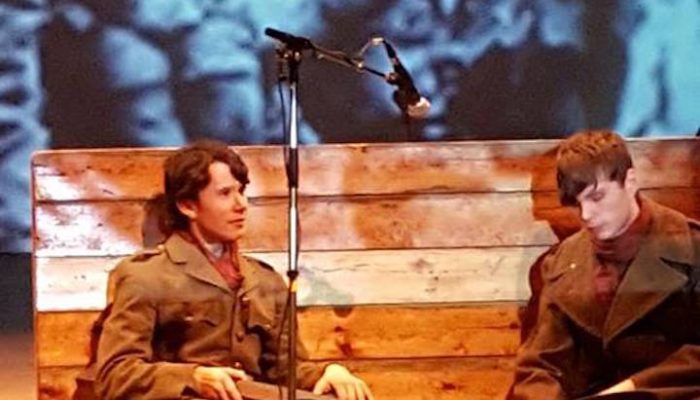 Whitby and The Esk Valley will once again echo to the sound of seasonal Christmas Music and Carols at Festival on the Moor’s annual Christmas show, involving many performers from the local community.

However, this year’s version has more to offer focusing on the theme of ‘Whitby and the Esk Valley in World War 1, incorporating dramatic scenes based on real life characters from the area and actual events at that time. It will also include the final performance from the Heritage Lottery Fund (HLF) supported ‘Ghost of Heroes’ project. This ‘Young Roots’ project has enabled young people from throughout the region to become immersed in some of the great stories and tragedies between 1914 and 18. Having previously studied the Rohilla disaster and the Bombardment of Whitby, they have recently looked at the effects of WW1 on the local community and the stories of some of the men from Whitby and the Esk Valley who lost their lives. These stories are set against a backdrop of Christmas, at home and in the trenches, for the upcoming show  at The Pavilion Theatre, Whitby.

It is a production of great contrasts, between the grimness of war and the joy of peace at Christmas, and we really hope the local community will once again come and enjoy the show. ‘We are immensely grateful to the Heritage Lottery Fund for supporting us in our work with young people. We think it’s hugely important for the next generation to know about their heritage and local customs and traditions and we are always so impressed and inspired by their enthusiasm, creativity and everything they contribute. Thanks also to those participating, having gathered material, written scenes and songs, rehearsed for hours and hours and worked so hard as a team to bring such a huge and diverse show together”, said Jeanette Grainger, who has overseen the project since 2014.

‘Ghosts of Heroes’ has been written and produced by young people from Festival on the Moor’s Shoots & Roots group with support from, folk musician and writer, Richard Grainger. It is directed by popular local actor, Ivan Hall, who has contributed extra material, and the leading roles are played by Caedmon College students Jayden Brown, Austen Chilton and Pippa Mesley. In January they will be producing a CD of their work and this can be pre-ordered at the venues on the night.

Fiona Spiers, Head of the Heritage Lottery Fund, Yorkshire and the Humber, said: “Thanks to National Lottery players the Ghost of Heroes project has allowed local young people to explore the impact and legacy of the First World War on their local area and broaden their understanding of how it has shaped our modern world. This project has enabled them to develop a host of new skills and share what they have learnt in a creative and interesting way.”

Many young people from the local area have been involved in the project including Botton Steiner School, who have contributed beautiful singing and traditional dance. In the forthcoming Whitby show on Saturday , Eskdale School’s Drama Group will give a moving and dramatic performance about the enormous loss of young lives from Whitby and  the Esk Valley. Musical support will come from the young musicians of Whitby Music Centre, under the guidance of Bob Butterfield, who recreate some of the famous songs and tunes of the time plus newly written pieces especially for the production. The young performers are supported by professional musicians, singers and actors including Blind Panic, Steve Dawes & Helen Pitt, Graham Brotton, Dor Fountain, Richard Grainger, Chris Milner,Kevin Young, Tony O’Neil, The Men Of Staithes, and Historical Re-enactors People from the Past (Karen Mason and Iain McNicol).