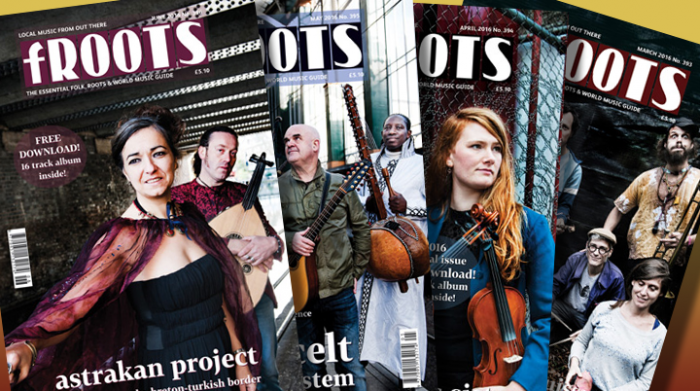 fRoots magazine is one of those publications that we tend to take for granted, for 37 years it has been THE independent resource for the folk, roots and world music communities. Whilst other magazines have come and gone in an increasingly squeezed marketplace, fRoots has weathered many storms. There is no publishing conglomerate behind the magazine, neither is there a wealthy benefactor, it survives purely on its sales and ad revenue. What it does have behind it is the almost maniacal dedication of its editor Ian Anderson, a man who has devoted half his life to the magazine, plus keeping it afloat when times were bad.

Ian has recently flagged up the mags need for constant support, and there are various ways to do this, but before you groan and move on read what Ian has to say:

fRoots has always operated on a shoestring and, along with most other magazines, has found times increasingly tight. Everybody has been hit by changing reading habits, the recession and subsequent austerity, the decline in the record industry and its advertising budgets, and many titles have fallen by the wayside. At the same time we’ve also seen a contraction in the amount of exposure our music gets in the national media – radio, TV, mainstream publications. Yet, by general agreement, we’ve been in something of a golden age for our music in recent years which makes our role more vital than ever.”

fRoots magazine has been one of the main independent resources for the folk, roots and world music communities for so long now that to younger people it has – literally – always been there! Countless readers, artists, music promoters, record labels and more have gained greatly – on all levels from pleasure to creativity to profit – from our efforts down the years.

fRoots has always stayed connected with the grass roots from which we grew, and operated outside of the mainstream music business. We’ve often been the first to highlight artists and musics that readers may not have been so familiar with, with more attention to cultural and gender equality than most. We’ve often got involved in event promotion and media partnership as well as simply publishing a magazine. Down the years it has been that deliberately non-commercial, involved, activist approach that has helped give us our incredibly loyal readership for which we are so grateful. Many thanks go to you if you are already a subscriber.

Arts Council officers have told us that because of all we do, we tick many of the boxes that they most require from clients in order to support them with funding, but unfortunately the Arts Council has no scheme to support ‘commercial’ magazines, no matter how deserving and uncommercial they agree we are. And we’ve never had the luxury of a publishing house or investor behind us.

Here at fRoots, we have taken many sensible steps to cut overheads including relocating out of London, freezing or cutting wages (in my case not drawing any pay at all for the past year) and decentralising our hard working staff. But without outside funding or investment we need the support of our community more than ever if we are going to maintain this valuable role in the new realities.