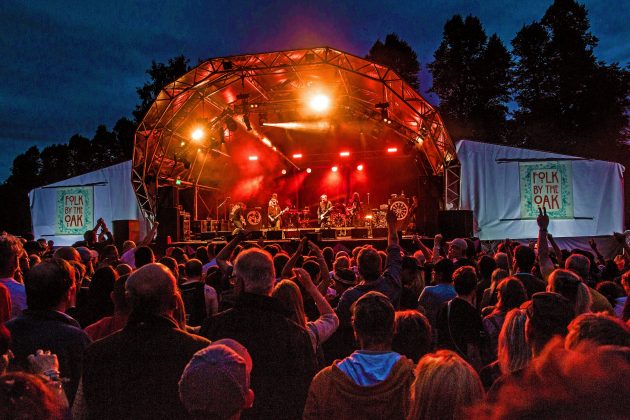 One of the UK’s most successful solo artists of the past decade, Frank Turner has carved out a career as a hard-touring, punk-folk troubadour, earning himself a diehard fanbase.  The release of his latest album, Be More Kind, saw Turner begin a new chapter in his musical career, an ambitious leap forward that led the organisers of Folk by the Oak to the conclusion that “the time was right for a headline set at Folk by the Oak”.

Said Festival Director Adam Slough “With Frank and his band The Sleeping Souls we know we are guaranteed a performance that is both intimate and poetic, yet as rousing as any good folk-punk performance should be. This is the level of energy we like to bring for our festival finale! This set promises to be Turner at his best, incorporating some of his most notable tracks with material from Be More Kind”.

Renowned for their ability to enthral audiences with their soaring vocals and stunning harmonies, indie-folk trio The Staves are returning from far flung adventures to their home county of Hertfordshire, and a Main Stage slot at Folk by the Oak this year. Also returning from overseas adventures is charismatic singer-songwriter and multi-instrumentalist Seth Lakeman. Fresh from his whirlwind world tour with rock legend Robert Plant & the Sensational Space Shifters, Seth recorded his ninth solo album, The Well Worn Path, in October 2018. Its high energy, up-tempo, classic folk-rock approach promises a great live set rich with his trademark foot-stomping, fiddle bow-shredding and soaring vocals.

Folk by the Oak have become known for commissioning new music collaborations, such as The Elizabethan Session, inspired by the rich history of their festival site. Currently garnering a great deal of attention on social media and in the press is The Lost Words: Spell Songs, Folk by the Oak’s latest commission, which brings together eight remarkable musicians to “sing nature back to life through the power of music, poetry, art and magic”

A musical companion piece to The Lost Words: A Spell Book by Robert Macfarlane and Jackie Morris, Spell Songs brings together Karine Polwart, Julie Fowlis, Seckou Keita, Kris Drever, Kerry Andrew, Rachel Newton, Beth Porter and Jim Molyneux. Following a residential gathering in January they recorded an album of new material (to be released in July) and enjoyed standing ovations at major venues around the UK during a February tour. Folk by the Oak will see them reunite for an exclusive summer festival performance.

Having last appeared at Folk by the Oak ten years ago, acclaimed singer-songwriter, author and theatre maker Karine Polwart has also been invited to perform a solo set. An artist of such exceptional calibre, this will be a unique chance to see Karine in two very different guises in one day.

Enjoying their first appearance at Folk by the Oak, Scottish firebrands Talisk have a reputation for explosively energetic performances and a multi-layered signature sound that has enthralled audiences the world over.

Of their line-up for their second stage Adam says “We like to bring our audience a high-energy, awesome act to close the Acorn Stage. This year’s Acorn headliners are multi-award winning and boundary pushing indie-folk sensation Elephant Sessions – in our opinion one of the best live acts currently on the folk scene today.”

Also announced for the Acorn stage, Grace Petrie has quietly become one of the most respected songwriters and protest singers working in the UK today thanks to her notable vocal talents, gift for lyricism and ability to tackle the most complex of material with wit, warmth and honesty.

The Acorn Stage will also welcome The Trials of Cato, quite simply one of the most exciting discoveries on the UK Folk circuit today, exceptional Skye musician and piper Brìghde Chaimbeul (accompanied by renowned Scottish fiddle player Aidan O’Rourke of Lau), and Brooklyn based Hannah Read, a talented multi-instrumentalist whose music reflects both her Celtic roots and Americana influences.

An unusual but no doubt hugely popular addition to the Acorn Stage line-up this year is an appearance by Robert Macfarlane and Jackie Morris, authors of The Lost Words – A Spell Book, the original inspiration for Spell Songs. For anyone who is a fan of the book this promises to be as entertaining as it is informative, as humorous as it is inspirational, and the perfect ‘warm-up’ act to the Spell Songs set on the Main Stage.

True to its ethos of creating a platform for a new generation of folk artists, the Acorn Stage will open with the London Youth Folk Ensemble, who have been invited to open the festival’s second stage since 2014.

A Truly Family Friendly Festival
As parents themselves, the organisers of Folk by the Oak have worked hard to make their festival as family friendly as possible. There are oodles of delicious food stalls on site but Folk by the Oak still encourage you to bring your own picnics, and there’s activities for all ages in sight and sound of the Main and Acorn stage, so keeping younger members of your group fed and entertained doesn’t have to impact on your enjoyment of the music!

TICKETS:
From £38. Children £18 (ages 4 and under are free).  Family and group offers are available
50p from every ticket sold is donated to their charity partner Willow