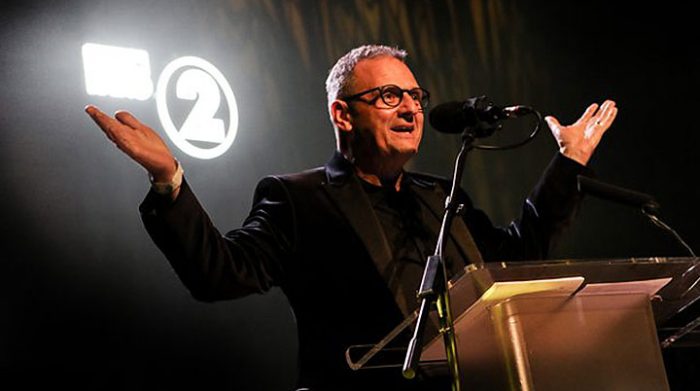 It’s the night when the folk community goes all Hollywood and glitzy, sporting suits and sparkly frocks… or at least a pair of ironed jeans and a proper shirt.  As the bespoke trophies are handed out Simon Jones mingles with guests, musicians and the paying public following the red carpet to Manchester’s Bridgewater Hall. Ladies and Gentlemen it’s the 2019 Folk Awards!

“I  prefer my folk music with an element of fusion to it,” Kevin informs me as we chat in the splendid glass foyer of the Bridgewater Hall, all fountains and skyscraper views which gleam impressively in the evening sunlight. No one’s being let anywhere else at the moment, although Maddy Prior’s already greeted me with her usual smile, a hug and genuine bonhomie before vanishing to rooms unknown. Kevin’s in luck as it happens, fusion is writ large on the list of nominees and live acts. Folk is no longer the provincial and cosy genre it once was, now open to influences on a global scale and never better exemplified than by Catrin Finch and Seckou Keita who blend Welsh harp and Senegalese kora in a beguiling waterfall of melody and weaving harmony. Two albums in and tonight not only are they playing live but they’re up for a fist full of awards.

Eventually tapes are pulled back and I make my way upstairs to the pre-show reception, drinks and finger food, where the Head of Radio 2, who now curate the Awards, is chatting amicably with broadcast big wigs. A woman in a startling orange dress and Doc Martens ushers a film crew around, startling quaffing musicians, requesting interviews and directing shots for maximum impact. One poor group of girls has to enter the room about four times before she’s satisfied with the footage. I find the affable Colin Irwin who reminisces with me about the high days of Melody Maker whilst a black haired chap sweeps his young female companion around introducing her to anyone who stands still for more than two seconds. We’re all well fed on kebabs, wraps and such when an announcement tells us to all make our way to our seats in the auditorium, we dutifully comply. 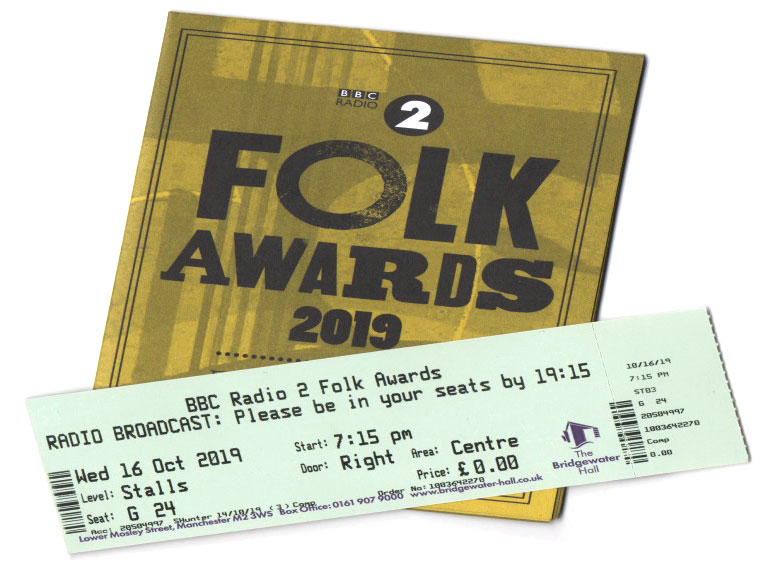 Once settled in the magnificent hall -Spiral Earth has a grandstand seat, Mark Radcliffe’s mike off to the left and smack in front of the performance area – there’s lots of people waving and acting like they’ve just found their long lost family, perhaps they have! Kellie While more radio executive these days than folk singer tells us all that we’ll be on air at any moment when drive time DJ Sara Cox hands over the Mark Radcliffe. The assembled, however many thousand stayed still and silent, on came our host, Miss Cox’s disembodied voice appeared from the speakers and Edward II – local heroes – kicked the awards off with a  mash up of reggae and country dance, Kitty MacFarlane handling an a capella intro verse. From that moment on you could almost hear an audible sigh as matters finally got underway; Mark R. was alone as his regular partner Julie Fowlis had business across the Atlantic Ocean, however she had thoughtfully recorded the nomination announcements before she departed.

Those nominations came thick and fast, the Lifetime Achievement Awards are always interesting, 2019 honoured Wizz Jones who unchanging and unapologetic was there at the very shaping of the British folk scene back in the 50s. He’s done it all through a love of American roots from busking in Paris to a recent collaborative album with his old chum Ralph McTell, he’s worked with Bert Jansch, John Renbourn, Derroll Adams, Clive Palmer, Andy Irvine, Pete Berryman and others too numerous to mention. Receiving his award from the Hollies Alan Clarke, Wizz was gracious and unfussed. His live number with son Simeon and grandson Alfie was pure 60s unplugged, drifter happiness. “This song has become something if a Celtic standard, I don’t know why,” he modestly offered. Enigmatic and silver haired his recognition may not have been that high profile but was richly deserved. The other Lifers – pardon the expression – were Dervish who’ve been kicking up a trad Irish hooley across the globe for nigh on three decades. They’ve even played jigs at the Great Wall of China, so how’s that for far flung? Fronted by Cathy Jordan who joked about whose mantelpiece the award was going to sit on – maybe they’ll take it in turns – they closed the whole shebang with ‘Down By The Sally Gardens,’ joined by Kate Rusby and Damian O’Kane who filled out a whirling set of jigs with his chunky banjo picking.

Best Album rewarded the talented lads from Trials Of Cato, ‘Hide & Hair,’ was and is a breath of fresh air amongst too many releases which follow already charted courses. It shows what a band meeting in the most unlikely of locations, in this case the near east, and without preconceptions can conjure. To be fair the band seemed endearingly stunned that they’d won. All smiles and thanks they collected their award and went off to have their photo taken – why no live song? After all it was the only category that the listeners voted in.

Musician of the Year was scooped by the modest and clearly moved Seckou Keita who had further success when both he and Catrin Finch were revealed as Best Duo or Group. The pair of them then provided a spine tingling instrumental which rose from quiet corners to fill the Bridgewater auditorium with rippling waves of harp lines in which Celtic and African stylings found common ground in breath taking unison. They are a truly inspiring act and one which provides a brave new face as roots music pushes ever forward.

Thea Gilmore paid touching tribute to Leonard Cohen who’d passed fairly recently er… 2016? She sang his ‘Dance Me To The End Of Love,’ in a passionate yet tender version proving herself an impressive and touching singer able to handle both intimate material like Cohen as well as her more usual pop folk fare. Well done lass. Folk Singer of the Year went to the sadly absent due to illness, Rioghnach Connolly from The Breath, presented by Miranda Richardson who gave an impassioned justification for the cause of folk music and invited Connolly’s Breath comrade Stuart McCallum  to collect it on her behalf. Standing in for the vacant live slot Kate Rusby, Damian O’Kane and Michael McGoldrick had done last minute dashing hither and yon to make sure they’d enough instruments to play, they needn’t have worried Manchester approved mightily. 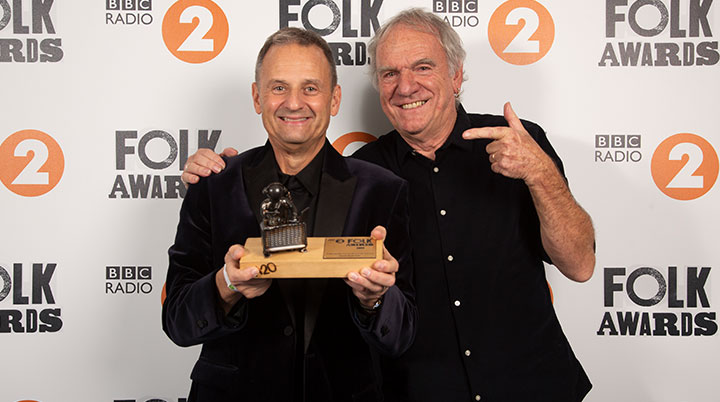 Brighide Chaimbeul fresh from the Isle of Skye took the Horizon award for adventures in piping and the Young Folk gong was won by a shaven headed lass from Leeds named Maddie Morris who follows in some pretty big footsteps, Jim Moray, Blair Dunlop, Wildwood Kin and presenters Greg Russell and Ciaran Algar. She sings poetically across a range of issues with songs that have a delicate touch but a heavy subject matter at the core.

There were grins all round when O’ Hooley and Tidow dropped by to perform a rousing and rocking version of the theme tune to Gentleman Jack, this was BBC event after all, so no one should really have been surprised, although the bloke two along the row from me clearly was. Had he read the programme?  Tracks of the Year both traditional and original went to the Celtic contingent with Ye Vagabonds ‘The Foggy Dew,’ winning the trad factor and Karine Polwart’s radical and somewhat jarring ‘I Burn But I Am Not Consumed,’ the contemporary honours. Which left one unscripted but very well planned moment. The normally breezy and buoyant Mr. Radcliffe has on the quiet had quite a year himself, even announcing on air his cancer diagnosis. To add to the significance he’s been broadcasting and producing in radio for some 40 years mostly under the guidance of producer John Leonard. So it was with some nervousness in his eyes when Ralph McTell wandered on and presented him with an award for ‘talking in between records,’ that the whole hall as one rose and applauded. Clearly touched M.R. responded with a defiant, “well I’m still here,” and may he be so for a long while to come. “I know who’s behind all this,” he opined tongue in cheek, “thank you very much.”

All done and dusted in two hours fifteen minutes, Trevor Nelson took over the air waves after  a quarter of an hour over run: “You lucky people, all that extra at no more cost. What do you want?” quoth our host. We all filed off into the early Manchester evening, some to party back stage, some back to car parks and all to think on reconvening next year, where ever it is and they’d better have a Lifetime award for Ian A. Anderson the long-time editor of fRoots which recently closed, who has done more to advance the cause of folk music than a goodly percentage of musicians. Y’ hear organising committee?  After all as one famous past winning band noted, it all comes round again.