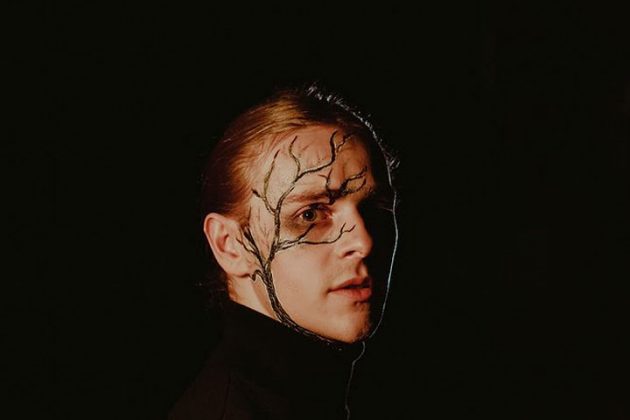 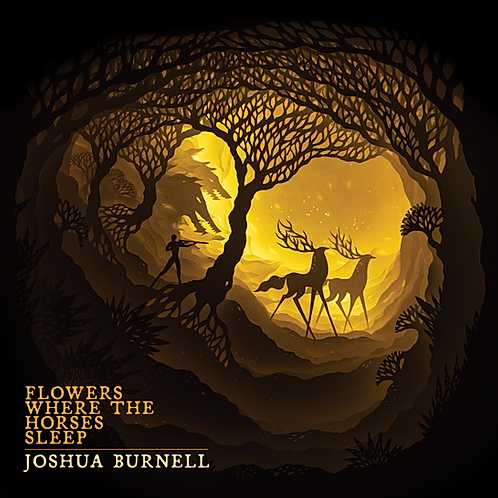 The last time I came across Joshua Burnell he was going three or four rounds with Brit folk rock and ended up winning. He’s also given to smearing black make up in copious amounts first around his eyes and now up his arms neck and hands. However he’s always been about more than straight copying and whilst he hoovers up influences with some speed, he always seems to put them to worthwhile use. Now comes ‘Flowers Where The Horses Sleep,’ which arrives in a prog worthy cover of mellow light and darker shades. It has as its focus his own writing which reflects his eclectic taste and desire to compose in a rainbow of styles whilst remaining firmly rooted.

At times this seems like early Jim Moray but without the electronics, yet knowing Burnell’s yearning to keep finding more, references to the Carthys and local history, right down to the level of researching individuals make his sources and background work hard to fault. ‘ Joan Of The Greenwood,’ is as he admits his take on the many big ballads he’s heard, think ‘House Carpenter,’ ‘Green Lady,’ ‘Thomas The Rhymer,’ and you’re in the right territory, though the most ready comparison is Jonathan Kelly’s ‘ The Ballad Of Cursed Anna.’ If he hasn’t heard that then, Joshua, buy ‘Twice Around The Houses,’ forthwith. Joan’s an unfortunate woman, unlucky in love she suffers a terrible fate. Ladies be warned, don’t go wandering in the woods at night! ‘The Ballad Of Mark Jeffrey,’ is another piece of faction, transported, a boxer, ne’er do well, practical joker… seems quite a bloke, the melody could be straight out of the tradition, it’s another successful slice. As is ‘Le Fay,’ which fulfills the promise of  wide screen production splendidly, an epic thing with keyboards and drums thumping and sustained guitar notes, heightening Frances Sladen’s vocals.

The names along for the ride include a couple of significant choices in Katriona Gilmore on fiddle and Spencer Cozens on the recording side which mirrors Burnell’s increasing confidence and reputation. One or two of his more reflective  numbers are slightly off beam but that shouldn’t stop you investigating, after all he’s learning at quite a rate;.What could happen if he investigates the Yorkshire stories produced by Mr. Fox and Bob Pegg is worth pondering. I like this lad> Why? Well anyone who alters his whole week’s plan to buy a copy of Shelagh McDonald’s ‘Stargazer,’ is alright by me, but then to buy a Fungus – Dutch Fairport – album along with it, why the bloke’s definitely a diamond. Find all at joshuaburnell.co.uk