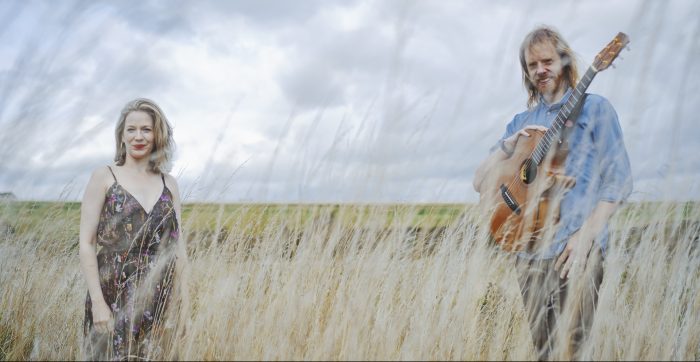 When Ben Walker and Kirsty Merryn announced a joint project earlier this year little did they know it was the last time they would see each other for months on end. The impact of corona virus on folk music has been huge – a year of cancelled gigs and empty venues, without even the solace of getting together to play. With a handful of demos recorded before lockdown and the future for performing artists uncertain, Ben and Kirsty regretfully put the EP launch and tour for Life and the Land on hold. They spent the time researching, writing, sharing and swapping from home until they could record together again.

Westlin Winds offers a first taste of the EP, with Spring 2021 dates announced soon – all being well.  As Kirsty says: ‘Westlin Winds is about that moment at the height of summer where nature overflows with abundance. In our version we wanted to reflect on humanity’s relationship with nature in 2020, how much we take with little regard for the consequences. Life and the Land was always meant to be about celebrating the fruits of a year’s struggle – I’m not sure we realised quite how apt that was going to be! We really wanted to have something to show for harvest time. It’s been frustrating not to be able to tour, we’re so looking forward to playing these songs for people. It’ll be worth the wait.’

Ben adds ‘This song is from a Robbie Burns poem he called Song Composed in August – despite our
best laid plans that’s when we ended up recording it! The way we’ve done it was inspired by Dick
Goughan’s classic version; in the end we kept the arrangement simple and let the lovely song shine
through. Hopefully, it’ll give a flavour of how our two styles combine and whets appetites for the rest of
the record.’

Ben Walker was recently hailed as ‘one of the best acoustic guitarists in the world right now’ by Total Guitar magazine and ‘a great guitarist, composer and producer’ by Mark Radcliffe on the BBC Folk Show. With his work sought out from punk to Proms, from Rough Trade to the Royal Shakespeare Company, his passion is putting old jewels in new settings. A BBC Folk Award winner with more than fifty albums under his belt as a producer and player, Ben released his own album Echo last year to universal critical acclaim. Reviewers called it ‘a profound statement connecting past and present’ (fRoots), ‘ambitious, distinctive and brilliantly achieved’ (Songlines) and simply ‘stunning’ (The Guardian).

Kirsty Merryn launched her debut album She & I in 2017 whilst supporting folk behemoths Show of Hands on their extensive UK Cathedrals tour. The album gained fantastic reviews and extensive airplay, with reviewers dubbing Kirsty ‘destined to be a big star’ (Sunday Express). One of her tracks features on Show of Hands’ new studio album Battlefield Dancefloor. Earlier this year her much anticipated follow-up album, Our Bright Night was chosen as the Guardian’s Folk Album of the Month.

Westlin Winds was released on Bandcamp on Friday September 11th on Folkroom Records to book a performance in 2021 contact gigs@benwalkermusic.com