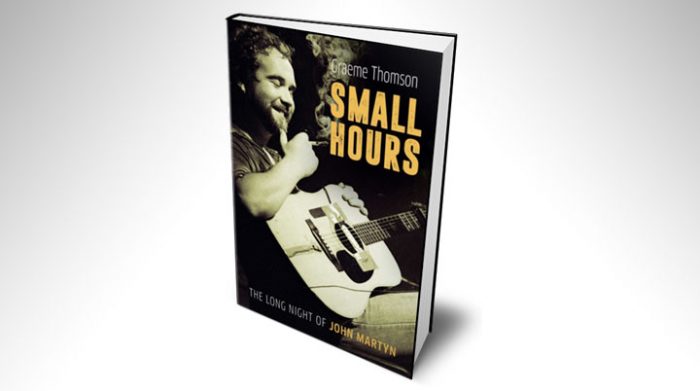 ‘He lived his life the same way he made music: improvising as he went; scattering brilliance, beauty, rage and destruction in his wake. Drawing on almost 100 new interviews, Small Hours is a raw and utterly gripping account of sixty years of daredevil creativity, soaring highs and sometimes unconscionable lows.’

I interviewed John Martyn just the once, it was around the time of ‘The Apprentice,’ an album rejected by Island Records but an item that he believed in so deeply that he’d reshaped it at his own expense, placed it with prominent boutique label Permanent and received high praise in the press for his troubles. His press agent had warned me, “ catch him early, before he goes to the pub,” as it turned out when I arrived at the venue John and his band were trooping out to the local hostelry so there was no choice but to interview him after the gig. To say it was unique is putting it mildly I don’t think my girlfriend – who’s now my wife – will ever forget it.

The concert was brilliant and perhaps predictably John was totally out of his tree by the time his huge roadie admitted me to begin the interview. During the whole half hour there was an atmosphere of unpredictability, an edge on which it was hard to balance, Martyn roared with laughter one minute, growled the next, he looked blank when I asked about the musicians on the sessions and regularly checked facts with his colossal companion who was built like a brick wall. John ate constantly through-out and downed further liquid liberally. Once I’d got enough material I bade him farewell and with thanks made an exit, outside we came to the realisation that we’d just experienced the paradox that was John Martyn. Looking back perhaps I should have known it, I had met him before at Leeds Folk Festival in 1985 if I recall, where he’d walked round the site plastered as a newt yet pulled off an afternoon set of unplugged virtuosity, just him and his guitar. Two sides to a coin.

Now comes a new biography ‘ Small Hours,’ written by Graeme Thomson whose press blurb quoted above, encapsulates the enigma that was John Martyn perfectly in just a few words. Subtitled ‘ The Long Night Of John Martyn,’ you can expect shades of light and dark as well as new interviews with those who knew him, those closest to him and those who met him as part of the music merry go round. John Martyn was never held back by genre or pigeon holes he played individual music and regretted little, he knew he’d never be mainstream, he was just too stubborn and dogged for that, much of his seeming bad luck was self-inflicted and he had feet of clay. However what he created and recorded was strikingly unique.

With two other biographies already in print and satellite publications like that of his first wife Beverly detailing much of his life, his story is already well known, it will be interesting to discover what angle makes Thomson’s telling different. Expect the unsettling and radiant. Published by Omnibus on July 9th.