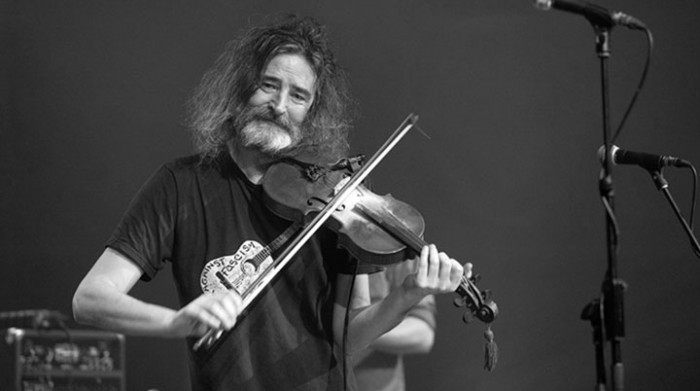 Angus R Grant is dancing round the kitchen along with all the rest of Shooglenifty; not physically of course, but as a reaction to the unexpected and sad news of his passing, I’m sequencing all of the Shooglenifty releases from Venus In Tweeds to The Untied Knot in chronological order. What’s coming out just now is one of those fiddle and mandolin runs which track funk as much as folk, the grooves always been the thing with Shooglenifty, no doubt where they come from, it’s where they’re going which makes them so vital. ‘Acid Croft’ was one rather desperate label applied to music which pushed the envelope in so many different ways, Angus R Grant was always a part of that philosophy. Right from his earliest days as a youngster he took to the family speciality of trad fiddle playing up in the Highlands around Lochaber, though when he hit his teens a varying view of the world meant he put the violin away and picked up an electric guitar, punk came calling. Visiting school friends including Kaela Rowan and James Mackintosh in and around Edinburgh soon meant that guitar was joined once more by his fiddle. The result was Swamptrash, who were as endearingly ramshackle as they were adventurous, ostensibly a punk bluegrass repertoire became so elastic that it stretched not only the music but attitude and the band’s cool. Recording wilfully obscure releases for DDT and midnight sessions for Janice Long at the BBC galvanised not only their melodic chops but cemented friendships which lead directly to the formation of Shooglenifty in the early 1990s.

Angus R. Grant was a quiet, unconventional individual, he undoubtedly contributed massively to the explosion of folk fusion in Scottish music and it was his personal zeal as well as distinctive playing which made Shooglenifty the force which they have become. I mean how could you resist a band who wrote a tongue in cheek piece titled Folk Police which they knew would get up the noses of the very people it lampooned? Short answer you couldn’t, and Shooglenifty, always with Angus R Grant to the fore, hair wildly out of control and a down at heel chic which meant he looked far older than he actually was. He was dedicated to Shooglenifty and rarely strayed into other line ups, though one of his first and last sessions had been as part of the Afro Celt Sound System, proving his quest for new global music to marry to his own Scottish sensibilities. Often he would take to the road, notoriously uncontactable, no mobile or social media user, eventually finding friends or relatives to visit, yet always turning up just when he was required. His passing at 49 is a waste of a special talent. When once asked if he felt close as a brother to the other members of the band, he famously quipped, “ brothers, more like wives!”

The Shooglenifty albums continue in the kitchen, the music will never tire, the band will continue and we’ll all miss Angus R Grant. Raise a glass and put on your Shooglenifty, it’s how he’d want to be remembered I dare say.