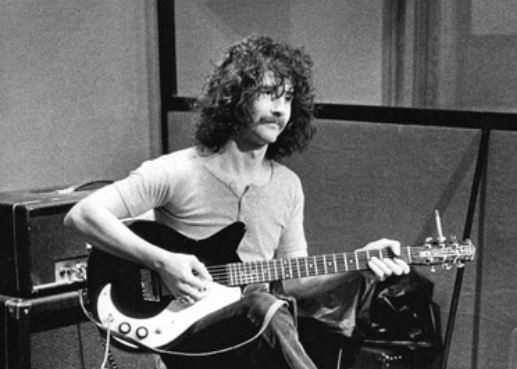 Gone though anything but forgotten, Tony Hooper (above) alumni of The Strawbs and Roger Burridge briefly fiddler with Fairport.

At 81, Tony Hooper had once been at the eye of the commercial reality of British pop, however he was terribly uncomfortable in such a world and basically turned his back on The Strawbs when they were on the verge of stardom.

Having founded The Strawberry Hill Boys with long-time friend Dave Cousins he’d been there through the bluegrass’n’ acoustic years, when Sandy Denny briefly joined, as well as six albums which saw the band sign to A&M records, acquire Rick Wakeman and move in a decidedly prog rock direction.

He left them in 1972, ‘Grave New World,’ was the last album he contributed to, it showcased The Strawbs new found energies but still had an acoustic heart which was where his sympathies lay.

After the band reformed in the 1980s for the Gas Tank TV series and the Cambridge Folk Festival, Tony returned playing both live and on several recordings, principally ‘Don’t Say Goodbye,’ and ‘Ringing Down The Years.’

During his time away from the group he had been a record producer using several of his ex-colleagues on sessions he over saw, he was also an educational author as well as playing in Pitchfork for ceilidhs and Misalliance which centred on renaissance music.

Roger Burridge was part of the blink and you’ll miss it, ‘Gottle Of Geer’ line up of Fairport, who’d dropped the Convention, aiming for a total restart with a six piece, two fiddles, one the redoubtable Dave Swarbrick, the other his young protégé Roger. Though he sang backing vocals on the album, Roger only ever appeared live with the restructured band which performed a few live dates over the summer of 1976.

Looking back that version of Fairport has been uncharitably dismissed as not working, though in fact the evidence is there with Youtube postings of a German TV appearance and a  fifteen minute festival clip from Norway that they’d got potential which sadly never got the chance to develop. The fresh faced Burridge keeps up with and weaves nicely around Swarbrick’s jigs and reels no matter how fast the pace.

After Fairport moved on so did Roger, as far as the USA, where he raised a family, a valued part of the lively Irish music scene. He had been ill for a while, passing away far too early at just 63.