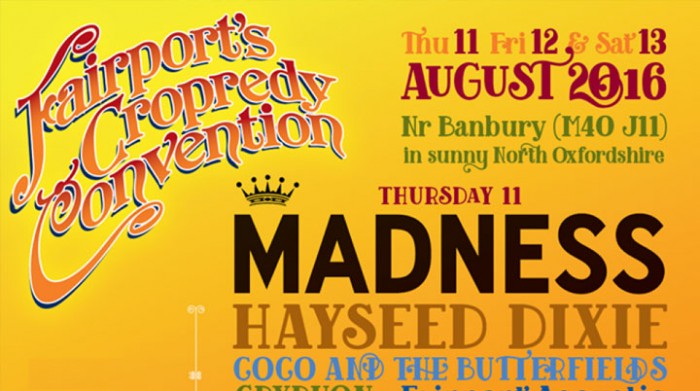 Breakfast on a barge floating in the canal is a good thing, it helps to watch the assembled Cropredyites negotiate the tow path and various obstacles. All the world seems to pass as a full English is prepared and mugs of tea consumed. A woman struggles against the flow of humanity with a fully collapsible table she purchased at the annual Cropredy car boot sale, “ only £3,” she cheerily calls as if it justifies the purchase, following her husband who’s swaying clutching two holdalls crammed full of bargains and God knows what.  Another bloke pleased as punch has paid a mere £8 for a copy of With The Beatles “ I think it’s first pressing,” he insists, the barge further down is selling collectors vinyl at a variety of prices. When someone appears with a penny farthing and two community police officers pursue a bloke in a bowler hat riding a dilapidated mountain bike, you know that more or less there is nowhere else you’d rather be on a warm, balmy summer morning. Welcome to the wild and wacky events that surround Cropredy 2016.

Speaking of the endearingly if slightly bonkers, Gryphon the High Lords of 70s medieval prog fusion delivered one of the most fascinating sets with the debut of a fresh line up, still replete with oddly shaped instruments that’d sound unearthly in less capable hands. As it is their warm, courtly creations rolled perfectly over the Oxfordshire countryside whilst Brian Gulland, he of the Gandalf appearance and star patterned blue trousers proved you could transpose the bassoon into a rock context. Graeme Taylor’s genteel guitar picking took off on flights of improvisation and Dave Oberle’s percussion solidly anchored everything alongside a chubby electric bass from Rory McFlarlane. As things turned out they spent ages signing CDs in the sales tent, a sure sign of success, when I spoke to them later they were enthused, exhilarated and bubbling with talk of a new album. (Watch this space.)

Long running brand names always do well here, thus Madness with a trouser bursting set, of cheeky Cockney ska got everyone partying, the hits tumbled, Our House, Embarrassment, One Step Beyond and nutty dancing ensued around the ever darkening field. Amongst the younger generation two bands stood out, the first Coco & the Butterfields a bunch of serial buskers who’re finding that life as a proper band is rather fulfilling, sporting a serious beat boxer as part of their line-up, their cheery, fiddle driven pop was a summery delight. With a propensity for songs with one word titles, Giants, Warriors, they were easily adopted by the audience as were Willie & The Bandits. I’d already got a soft spot for these guys, hard-working, Cornish, it’s a DIY ethos that got them the slot on the stage, when just a couple of years before they’d been playing in the local pubs at the fringe. Theirs is a huge sound, even if they are a trio of guitar, bass and drums, it reminds you of blues rock giants from decades before yet with just enough grunge and garage to add a contemporary coda. Executed with credibility and verve as well as a deal of delicious licks on the slide guitar, their set was a deserved highlight.

The Bootleg Beatles were fun, their note for note, vocal for vocal take on the Fab Four marks them out as the ultimate in tribute acts and are as close to the moptops live as any of us will ever get. “I did actually see the Beatles,” muttered one lady alongside me, “and I have to confess I couldn’t hear a thing for all the screaming! Now I know what they should have sounded like.” Job done then.

Richard Digance’s  Saturday opening is by now part of Cropredy tradition, he’s made the sometimes difficult first on slot all his own so no one can be too critical if he repeats the odd song, joke or seated morris dance, no I’m not joking, the committed know to bring their hankies!

Mind you if you want audience involvement in extremis then Hayseed Dixie took some beating, with a clutch of hard rock songs done as mountain music, they rolled up a mutant cross of Deliverance like individuals, Dillards and speed metal. Hard to play that stuff on bass, mandolin, banjo and guitar? Think again. With stage patter that’d make Bernard Manning blush and the freedom to tell things exactly like they are, Dixie gave us a story, opinion, chorus or instruction with every song. Playing an extended set there seemed to be no limit to their repertoire, Journey, Survivor, Deep Purple and loads more clattered out as if they’d been written up a creek in the Ozarks.

Class also showed with the arrival of Steeleye Span, pulling no punches they’d a new guitar player, Spud Sinclair to show off and a fairly recent arrival fiddler, Jessie May Smart, between them they’ve injected a deal of fire into the other Spanners who just seemed to be waiting to try something different. We got familiar material like Boys Of Bedlam moved into something other, in this case a rap section in the middle. The music has widened and muscled up, a bit like they did I suppose many years back with the release of Parcel of Rogues, here they carefully picked numbers from their vast catalogue produced in decent, varied settings ranging from soft core acoustic to full throttle, loud yet still gloriously melodic. Twenty thousand applauded and the joie de vivre within the band was almost tangible. A new album is due and promises much.

Having opened the festival, our hosts Fairport Convention of course closed it too. The whole weekend had been long on memories of Dave Swarbrick not in any way sad or hung with regret but more a celebration of what he’d contributed to Fairport and their family of musicians. Dave Pegg confessed in the programme just how much he owed Swarbrick who after all had dragged him to live in Cropredy in the first place. So it was only fitting they remember him which they did in typical Convention fashion, the crowd fell totally silent and somewhere no doubt fiddle in hand he was watching us all.

Back on the barge, the full English finally arrives and talk amongst the diners falls to the ever burgeoning fringe which surrounds all the official goings on. The entire village becomes a party for the weekend, you can buy anything from a buffalo burger to a huge wooden garden sculpture, climb the church tower – in the name of charity of course – watch local dancers and naturally try a variety of drinks. The pubs put on free music and one guy who caught attention was John Verity once of jazz rockers Argent, now playing the kind of fiery blues rock only a guitarist of experience could conjure. His version of Purple Haze made the hairs on the back of your neck stand on end, equally his own material was well constructed and delivered with panache. Indeed this was a few days filled with riches, the unexpected and lots of pleasant surprises. Back next year? What do you think? Truly something for everyone.