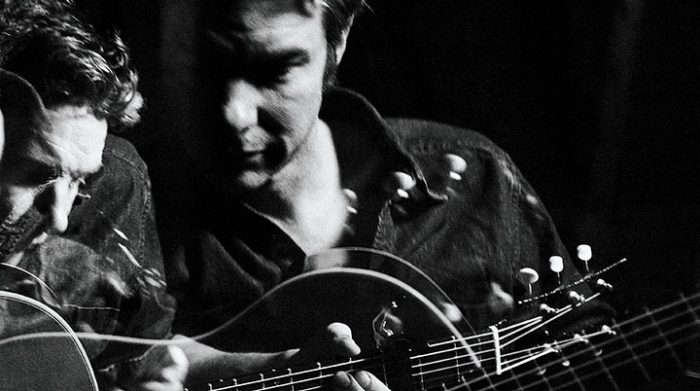 Songwriter though, probably, best known as a guitarist, James Elkington is clearly someone who you’d like to have around in the recording studio. Born in England but having moved to the US in the 90s, he’s made his base in Chicago where he’s been involved in musical projects with the likes of Wilco as well as coming to the attention of folks from out of town such as Richard Thompson, Steve Gunn and Michael Chapman. ‘Ever-Roving Eye’ is his second solo album and a further opportunity to pull together all his talents following on from 2017’s ‘Wintres Woma’.

Whilst the title of this new album is taken from one of the tracks, it does summarise the restless nature of Elkington. The tracks move from songs to instrumentals, gentle guitar work to a vibrant band; there is a sense that no sooner has he laid down one track than his mind is moving to the next. However, disjointed, it is not. It’s held together by fluid guitar work that seems to be inspired by musicians from his native country with Pentangle’s Bert Jansch and John Renbourn to the fore as well as Davy Graham and Richard Thompson.

The instrumental ‘Rendlesham Way’ could have come straight from the folk and jazz mould of Jansch and Renbourn. However, it’s the energy of tracks like ‘Late Jim’s Lament’ and the opening track, ‘Nowhere Time’, that are amongst my personal favourites. Both the latter songs reflect on the little time we have in the world to complete our work. All are fine illustrations of the crafted arrangements and superior production on this record.

The title track has a rolling rhythm, guitar effect and strings that position its inspiration in a more psychedelic period of the 70’s. Neatly arranged and supported by his fellow musicians, it highlights how well prepared Elkington comes to this record. He works alongside old friends Nick Macri on bass, Macie Stewart on violin and brings in Lia Kohl on cello, Spencer Tweedy on drums with vocal contributions from The Weather Station’s Tamara Lindeman and woodwind from Paul Van Mertens (Brian Wilson).

Drawing upon these musicians, Elkington has been able to be more expansive on ‘Ever-Roving Eye’ than on its predecessor. Pulling away from older folk traditions and melding together arrangements that include jazz and a dash of psychedelia, now seems to be the time to step into the spotlight for James Elkington.