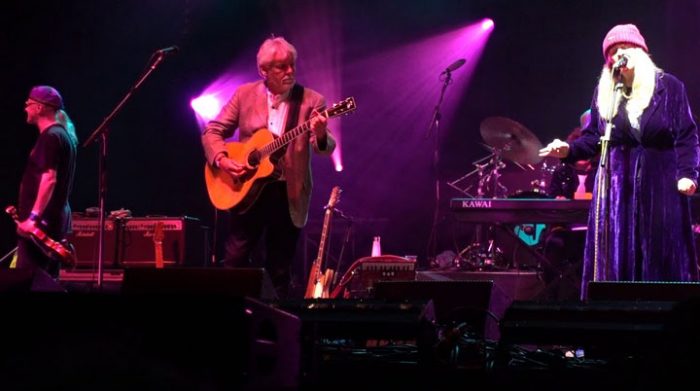 As gazebos flew away, tent poles twisted into impossible shapes, intriguing mysteries abounded, who was that bloke in the purple wizard hat? Simon Jones ventures to once more to the mystical fields of Cropredy.

Cropredy is forty years old, over that time it’s taken various guises, had a slipstream of continual organisation and grown from being Fairport’s bijou reunion event to a festival that is seen as a fixture of the British summer. It’s growing still with sub festivals in the camping grounds and an expanding fringe which pulls many names that have graced the main stage. A popular game this year was ‘Guess how many Cropedys I’ve been to?’ two, ten, twenty, thirty… “we’ve been to all of them,” grinned Dave Pegg during Convention’s opening Thursday acoustic curtain rasier.

As usual there are mysteries and gossip down amongst the folding chairs and pint pots. “Who is that man?” asks the lady in the group alongside, “he was here last year as well and he always has a stick and wears that hat with stars on.” 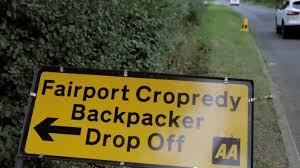 As she contemplates the enigma that may be Gandalf the rest of us are concentrating on another enigma, Lil’ Jim a goth who appears to moonlight as a bayou one man band, guitars, foot pedal, huge wheezing accordion and a voice as rough as sand paper. He’s from Derby, his Dad was in 80s Brit Louisianna overlords R. Cajun, “ I play all kinds of venues,” he relates before launching into a story about how a bloke at a bar once told him he couldn’t sing in French. Bars, clubs, pubs, “this is the biggest festival I’ve played so far, isn’t it great?” A whoop from the field and he launches into a gritty, stomp along sung in French. He gruffs his way to the end wrestling chugging sounds from his squeezebox. Gogol Bordello took the Thursday honours with punked up gypsy jazz, apparently they once supported Madonna, their high energy, vibrant music becomes an instant hit and before you know it excitable types are dancing like loons in boots and wellies. The leading Gogol is as mad as a barrel of monkeys but his sheer front and engaging stage presence make up for any short comings in his vocals. Closing The Waterboys played a decent version of ‘Whole Of The Moon,’ but couldn’t really match what had gone before for excitement despite a piece of OTT bravado from Mike Scott in the programme.

Then it blew and it rained!

Arrival late on Friday morning came with tales of wind that tore through tents and flattened awnings, floods which soaked sleeping bags. Some obviously the work of exaggeration, other individuals clearly spent an uncomfortable night sleeping 4 in the car. In a twist of irony Fairport displayed huge screens across the weekend relaying the message about not leaving your cheapo tent behind when the festival was over: plastic waste! One tent equals 8,500 plastic straws apparently. The storm put loads of tents out of commission, the Cropredy faithful dragged their trashed bivouacs home. Green credentials intact then.

First to impress of the Friday line up were harmonic sister/cousinhood Wildwoodkin, their hypnotic guitars chiming, deep rhythms and vocals, winning lyrics moving their repertoire from folksy beginnings outwards to embrace wider musical disciplines. They were coy and playful winning over as the rain danced on hooded heads, even the sun came out! Next Wilson and Wakeman (Damian and Adam,) seemed a slight mismatch on paper, acoustic prog with keyboard and unplugged guitar? Could it work? “We played here a few years back as Headspace,” exclaimed Mr. Wilson, “I think we emptied a good portion of the field, we played heavy metal with deep progressive improvisation. Hope you like us better this time.” Against all the odds with much wit, banter, real talent and ability they did indeed give us acoustic prog and much more beside. Songs of their own, songs from Adam’s family background, their rendition of his father’s famous piano stint with David Bowie, ‘Life On Mars,’ Wilson’s theatrics involving a ramble through the non plussed crowd. What would they pull out of the bag next? “This song took up two years of my life,” related Damian before launching into Les Miserables theme ‘ Bring Him Home.’ Cropredy goes West End! Wilson and Wakeman or should that be Wakeman and Wilson? worked thanks to bravado and never knowing what they’d pull out of the hat. They stayed all weekend meeting fans and doing press, their interview was a hoot. Decent lads catch them if you can.

Caravan were gentle souls, wiser, elder statesmen, rockers who still had the core of the 70s line up, Pye Hastings leading the line. A few sound problems early on were ironed out and their melodic, improvisations proved both timeless and tempting. The last time Richard Thompson and Seth Lakeman appeared on the Friday night bill it was Seth who topped it but tonight he came first, careering through a set of Devon folk funk, heavy on the fiddle and big on chunky, block rhythms from a trusted trio. Cropredy predictably loved him but then they’d been in jovial mood all afternoon, even the bloke in the ice cream van was spotted swaying in time with Seth’s fiddle as he served up cones and lollies.

Inevitably Richard Thompson was received with passion and fervour, he is after all worshipped on this sacred ground but with every reason. Backed by what I have to say are still his finest musicians, Nicol, Pegg and Mattacks, he gave forth both acoustic and electric segments and made all other guitarists look like rank amateurs. Almost telepathic the interplay between the participants was automatic and that understanding created through years of association, key. You just knew when they launched into ‘Shoot Out The Lights,’ the guitars were going to crackle, howl and whine, Mattacks and Pegg steady and precise under it all, solid as a rock. ‘I Want To See The Bright Lights Tonight,’ was a rollercoaster that shot through Cropredy like a bullet. You felt charged and emotional all at once. This was genuine British rock. Magic was in the air. It was raining but no one cared a jot.

Saturday. What’s this? A Gaelic rock band fresh off the plane after touring Switzerland, sounding like Runrig, playing expansive pop informed by their highland heritage? Tide Lines are almost perfect, they breeze through a set packed with melody, melodrama and underpin it all with bagpipes. What’s not to like? Saturday was shaping up nicely. Daphne’s Flight took us through a set of harmonies and female empowering material, but then with such experienced contributors as Chris While, Julie Matthews and Christine Collister it’d be hard not to be impressed. In jubilant mood they bounded along through individual compositions, Collister pulling off one of the festival highlights when she came up with a deep gospel rendering, her voice was made to sing soul, she hushed 20,000 people and received a deserved standing ovation for her effort.

Then…Sin Dogs…. Zal Cleminson if you rewind far enough was the guitarist with the clown make up in The Sensational Alex Harvey Band- ‘Delilah’ and ‘The Boston Tea Party’ were hits if I recall – he retired for a while but got bored so Sin Dogs, “ I named the band after a song I wrote,” he informs when interviewed. With his make up now reduced to a half, yet somehow more sinister, he prowled the stage like the Child Catcher in Mary Poppins only instead of a net he had a guitar. There are certain bands that Cropredy occasionally will throw into the mix to keep you on your toes, to get a reaction, Sin Dogs were one. Their set was gung-ho hard rock, played at 1000 mph with exaggerated theatre, loads of stage prowling. They certainly seemed to divide the audience between those who scratched their heads wondering why they were playing and those who wanted a heavier aspect to proceedings.

A theme which was continued by the arrival of long term Jethro Tull icon Martin Barre. Fifty years is a long time in music and there seem to be a goodly number of groups around that can flag up 1969 as their birth year, having seen Ian Anderson’s incarnation back in April here was a chance for some comparisons. The first thing was the absence of flute which gave the songs a rockier edge, guitars filled in and the vocalist did his best Ian A without standing on one leg. It’s hard to get everything you’d see if we were on the road into a festival set,” Mr. Barre confided into the Spiral Earth recorder, “ we do it chronologically you see and there’s the acoustic segment to get in with the girls.” Which was a pleasant diversion from the main course, it reminded you that with a small acoustic guitar and a capo high on the neck Tull created unplugged atmospherics that could be as effective as any stadium rattling. Martin Barre is a crack guitarist, his solos efficient and expansive by turns but then the guy is a signature piece of the Tull sound. Entertaining to the last note, a deserved success.

Martin Simpson armed with only a guitar strode on stage and gave us all a folk club vibe. With painstaking introductions to his songs each carefully considered and selected you can see why he’s always at the top of most favourite lists. Precise playing with blues slides and fingers so speedy he mixes styles and genres to conjure an individual sound which relaxed everybody and paved the way neatly for our hosts.

In recent years Fairport’s legendary Saturday night appearances have begun to change in form, fewer ex members, more friends. 2019 saw the formation of Fairport Extension where the core band were supplemented by extra instrumentation and voices, the likes of PJ Wright and Sally Barker from the last line up of Fotheringay, long time chum Anna Ryder, former drummer Dave Mattacks. They dug into their past repertoire selecting lesser known items, lots of Maartin Allcock period items in tribute to the late guitarist who passed a few weeks after Cropredy 2018. Sally Barker’s ‘John The Gun,’ was a joyous highlight as was ‘My Love Is In America.’ The addition of brass proved interesting though the inclusion of Joe Brown was a little perplexing. As usual it was the massed choral, sway along ‘Meet OnThe Ledge,’ which closed proceedings and the inevitable questions began as we trooped from the field.

“Well, who was that guy in the purple hat anyway?” asked the woman alongside still obviously burning with curiousity. Some things are better left a mystery.