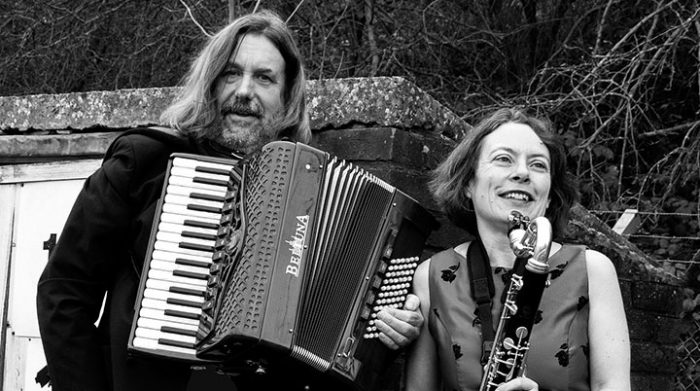 This album has been bobbing around for a couple of years and was thrust into my hand recently. The Pagoda Project is Paul Hutchinson, from Balshazzars Feast, and Karen Wimhurst, from, well, just about anything from the ENO to climate change circus shows (I kid you not). Now I generally get twitchy and start eyeing the exits when ‘Jazz’ and ‘Fusion’ are mentioned in the same sentence, but Clarion resoundingly kicked my trepidation into touch.

Being kicked in the trepidations is nowhere near as nasty as it sounds, so often we let our prejudice or previous bad experience block out whole avenues of music to explore. Clarion proves to be not only an avenue, but also a rabbit warren of delights to discover.

To say Hutchinson is a master of the accordion would be a massive understatement, in his hands it loses all mechanical pretence and becomes an orchestra in it’s own right. Likewise Wimhurst, who sheer passion for the clarinet comes through in every note.

The album of original ‘folk jazz fusion’ compositions is so much more than just that. Yes, there are recognisable folk structures and clarinet lines that soar, wheel and come back down, but the album draws just as much from the modern classical movement.

Don’t let that make you think it is in any way somber or highbrow, Paul’s infectious wit runs through it all. Just look at the track descriptions. Such as ‘Shipton – A town in the Cotswolds which is largely responsible for keeping Farrow and Ball solvent.’

Clarion balances the playful and joyful against the meditative and reflective to create an album that is really uplifting. Pagoda Project make transportive music that draws you in to their aesthetic. Just wish I’d found it earlier?