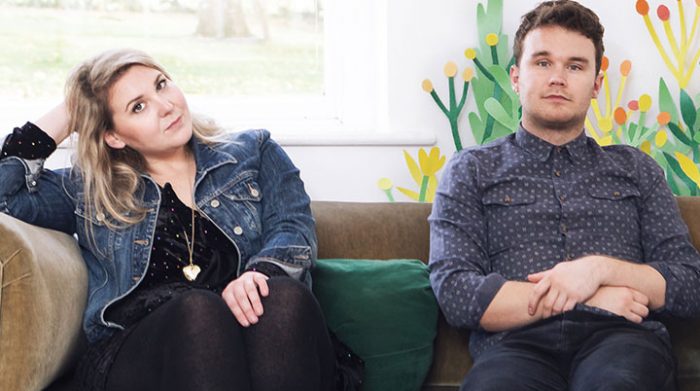 Sam Kelly and Ruth Notman have joined forces to produce  a ten-track album of traditional and self-penned songs within a contemporary style. Damien O’Kane as producer adds that extra expert touch. It’s almost ten years since Ruth Notman released her last album, ‘Life of Lilly’.  Although well received at the time, Ruth decided on a career in medical sciences so has been on hiatus until now.

All the tracks are notable and memorable in many ways, my favourites are

‘Changeable Heart’ the title track a standout love song; with its pop style guitar based sound and catchy hook laden chorus.  Josh Clark’s beat drives the rhythm along. Alternate vocals from Ruth and Sam highlight the quality of their harmony vocal duet when it kicks in. This song offers us the full modern anthemic experience not often a characteristic of folk song.

‘Caw the Yowes’ a fine version of this traditional tune indeed, made better by that inspired vocal duet over the background of electric tenor guitar and analogue moog synth adds the modern feel. ‘My Lagan Love’ Sam’s vocal opens this song with a hypnotic guitar line underpinning it throughout Ruth’s gentle and mysterious vocal takes over later on, her e- piano and the echo adds the atmospherics

‘The Island’ by Paul Brady this heart rending love song is based on the troubles in N. Ireland.  Sam opens and Ruth takes her turn before they both then come together for the final duet. A simple arrangement but one which lingers long in the sonic memory.

This is a wonderful set of love songs honed from the bedrock of tradition but with an edgy modern contemporary feel.  Overall an impressive work and a marvellous showcase for the talents of both Ruth and Sam.