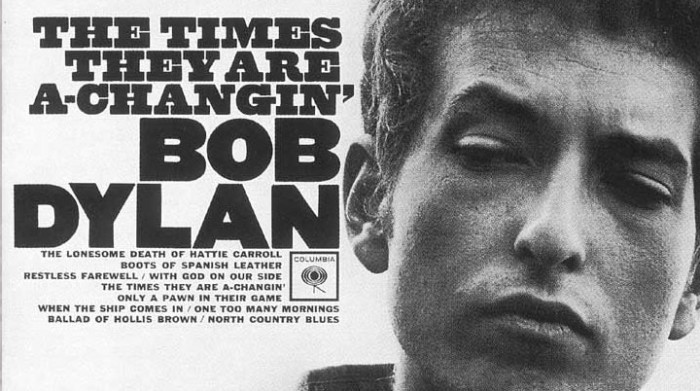 As a follow up to meeting his hero Martin Carthy on the occasion of his 70th and writing a blog about it for us, colin has resorted to verse to celebrate Bob Dylan, who is also 70 this year. This is the whole of Dylans career in one wonderful poem…

Hey hey Bobby Dylan, I wrote you a song
About a kid called Zimmerman who took us along
On a magical journey right to the top
You took a bunch of folk songs and turned them to rock

I wish I had known you when you came to New York
From Duluth, Minnesota with all your jive talk
Of times that were changing and a wind that blew
It seemed nobody else, knew what you knew

No-one recognised you when to London you came
The last thing you expected was fortune or fame
You attended a Madhouse, which was on Castle Street
But you met Martin Carthy and fell on your feet

You took home Lord Franklin and borrowed Scarborough Fair
And Bob Dylan’s Dream emerged through the air
You played Gerdes Folk City, but I still wasn’t sure
Until you really got angry and sang Masters Of War

Vietnam, civil rights and that whole nuclear thing
Marching with Joanie and the great Dr King
Newport adored you, you won Seeger’s acclaim
But did you betray him? Were there pawns in your game?

I’d never have booed you back in ol ‘65
Or called out ‘Judas’ when you got electrified
A generation’s spokesman needs to have fun
And what’s not to love about Highway 61?

It must have got to you, the pressure of fame
Idiot critics and the weight of your own name
If you’d died in that bike crash, would we have left you alone?
Or made you turn in your grave like a rolling stone?

There must be some way out of here, you said with a frown
Maybe Tom Thumb’s Blues was bringing you down
So then you ducked out of the whole crazy game
A recluse, they said, or were you insane?

But even self-portraits a story do tell
You followed your instincts and they served you so well
You sang of the past and a new future too
Yet poor Mr Jones, he hadn’t a clue…

Your words were coded in mystery and rhyme
They made little sense much of the time
Who was jack of hearts, Judas Priest, Jokerman?
Is salvation found in a grain of sand?
Of Sarah you sang in the grooves of Desire
She gave you a fresh start, your muse was on fire
But love can go bad and will easily collapse
When you looked at the ground, there was blood on the tracks

There were times when you lost me, maybe that was the plan
You’d long since deserted the tambourine man
Are you looking for something before it’s too late?
Or is this another, simple twist of fate?

You returned to the road and that’s where you remain
Re-inventing back pages, your songs never the same
One thing I know and this is for sure
It’s a tour that won’t end when you knock heaven’s door

You seldom say much and some think that rude
No smiles, waves or banter, just attitude
But we still love you, never give up the fight
And don’t think twice, Bob, you know it’s alright

They say don’t have heroes, they’ll all let you down
But I’ll still go to see you next time you’re in town
For despite all your flaws I’ll never forget
Through you I found Guthrie and the folk music set

I’ve seen you plenty, but we never did get to meet
You took me on a journey, Positively 4th Street
The Isle Of Wight, Sydney, Dublin and Rome
Lost in your riddles with no direction home

I think of the time when you turned up that day
And sang a Song To Woody, which pointed the way
To new times coming though you didn’t know how
You were so much older then, you’re younger than that now

Now it’s hard to believe that you’re three score and ten
A god among writers, a king among men
A genius, perhaps? That’s undoubtedly true
All hail to a hero, Bob Dylan that’s you…