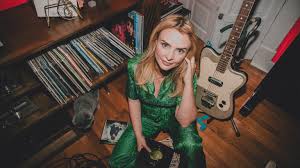 It doesn’t take a genius to figure out from the title what’s going on here. What Emma Swift presents is an album – a mite short at eight tracks – of Dylan covers, begun a while ago but polished up during lockdown conditions, even produced by email! All told you might think that’s not the best of environments to create. However, you have to factor in Emma Swift’s wistful vocals and settings designed to get the best out of her interpretations because that’s what they are. This is Dylan done her way and that involves lots of space in the arrangements, sparse but effective backing which shimmers especially in the guitar work of Robyn Hitchcock whose love of roots and folk is well documented. Recordings began in Nashville – Magnetic Sound Studio if you must know – all under the watchful gaze of Wilco’s Patrick Sansone who’s stretched the variation to match Swift’s intention, which was to learn from others who’d covered Dylan, chiefly Joan Baez and Sandy Denny and to add that knowledge into her own repertoire. If I’m honest to these ears the opening ‘Queen Jane Approximately,’ with its pleading chorus “ won’t you come see me Queen Jane,” and chug along, nostalgic rhythms is pretty much the cat’s whiskers, reminded me of Dylan and The Band which is of course no bad thing at all. ‘I Contain Multitudes,’ is a hymnal with a wistful vocal and intimacy that’s alluring. ‘Simple Twist Of Fate,’ and ‘ You’re A Big Girl Now,’ also hit the mark.

Apparently dreamed up after a period of depression at least Swift put her recovery to  purposeful use. Whilst it won’t shake your world, this is a quiet corner to retreat to when the wider world starts to weigh heavily.  Tempting and charming.