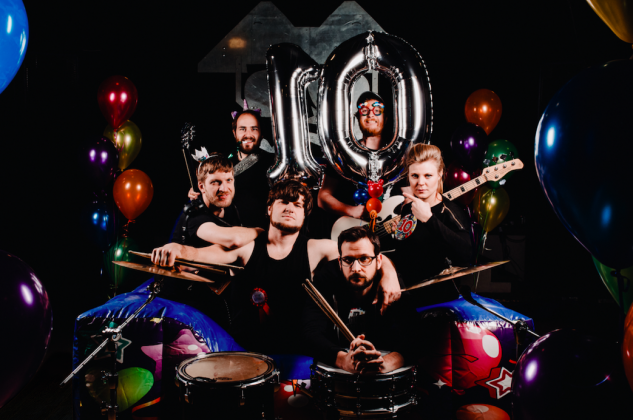 Festival favourites, Blackbeard’s Tea Party, infamous for their frenetic fiddle tunes and thumping backline, celebrate their tenth birthday as a band in 2019 with a lengthy autumn-winter ‘Ten Yaar Anniversary’ tour across England and Wales and a special re-release of their best-known single, ‘Chicken On A Raft’.

Following a packed summer schedule of festivals, including Gate To Southwell, Sidmouth Folk Week, Moira Furnace Festival, Folk East and Whitby Folk Week, the tour will begin at Telford’s Warehouse in Chester, taking in Leicester, Manchester, Hull, Oxford and Southampton, amongst others, before finishing at the John Peel Centre in Suffolk on 14 December. Fans will be able to buy limited edition tenth anniversary merchandise at the shows. Charismatic front man and rabble rouser, Stuart Giddens, says: ‘It’s not every day your band makes it to ten years. We’re so pleased that we’re still here, playing gigs and festivals, getting people dancing. It’s a difficult business, especially for a band that plays the kind of music we do, so we’re delighted at the generosity and support of our fans.’

Over the decade, Blackbeard’s Tea Party have become known for their energetic performances, their innovative fusion of folk and rock – and their unusual giveaways, such as their branded teabags at the 2014 Glastonbury Festival. ‘We’ve had some brilliant moments in the band over the last ten years. At Cropredy in 2014, we were voted “best band” and the queue for our merch had to be moved because it was too long! In fact, 2014 was a particularly good year, as that was the year we were invited to perform at the Rainforest World Music Festival in Borneo – ‘an incredible experience!’ Stuart recalls. The band has also been a popular artist on the BBC Radio Two Folk Show, under both Mark Radcliffe and previous presenter, Mike Harding. Blackbeard’s Tea Party have also become synonymous with Sidmouth Folk Week’s Bulverton Marquee and, in 2019, will be taking it over for a concert-ceilidh double bill.

Confirmed Tour dates are as follows:

For more information on anything ‘Yaar’ visit http://blackbeardsteaparty.com